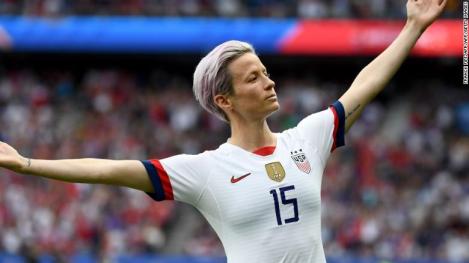 She was nowhere near the biggest bruiser on the field (that honor goes to France’s Wendie Renard, who at 6’ 1” was the biggest in the entire tournament). But when there were a few inches of daylight between her and the net, Megan Rapinoe found a way to corkscrew the ball between the defenders and past the goalkeeper and onto the scoreboard.

I don’t watch sports on television much, but I have a soft spot in my heart for what the world calls football and we Americans call soccer. That is because my Dad played for a Czechoslovakian club in the 1920s and for various nationality teams in Cleveland during the 1930s. When I was a child, he would occasionally take me to Moreland Park, where he was widely recognized by the old hands at the game. Elek and Emil Paris were the Terrible Twins of the Cleveland clubs. I heard all the stories about the players whose legs were broken by my father’s powerful kicks. These stories may have been slightly embroidered, but I ate them all up with a feeling of family pride.

The fact that Donald Trump is highly critical of her makes me admire Megan Rapinoe all the more. When asked by a reporter whether she would grace the White House with her presence, she replied that “she was not going to the f—ing White House.” That set the Donald off, he being rather thin-skinned by any kind of criticism.

There was a follow-up to that, however. “I stand by the comments that I made about not wanting to go to the White House with exception of the expletive,” Rapinoe told reporters. “My mom will be very upset about that.”

Still, during the Star Spangled Banner, all her teammates stood with their hand to their hearts—except for Megan, who had her hands at her sides. I like this girl: She’s a rebel!

Best in the World

Something happened quite suddenly in he last ten or twenty years: American women athletes have proven themselves time and again to be world class contenders. Today, the U.S. Women’s Team beat Japan 5-2 for the 2015 World Cup in soccer.

Although I was not able to watch the game, I am delighted to hear that our women won, and convincingly, too.

I would like to see soccer football replace the so-called American football with its armored players pawing the dirt with their feet during the innumerable time-outs that were no doubt created solely for the convenience of advertisers. Soccer football is the real deal: It goes back and forth in waves until a sudden break-out results in a goal.

Americans will always have problem with the concept of a tied game, especially when the result is a 0-0 tie. But even some of those games are exciting. 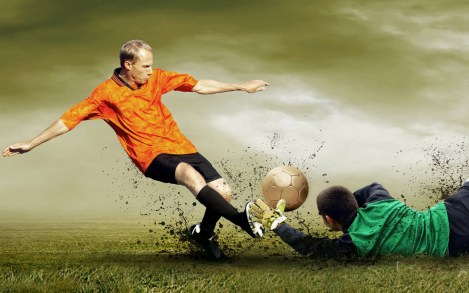 Frankly, I think that most American spectator sports are there strictly for the commercial breaks. There is a brief spurt of intense activity, followed by several interminable ads directed at selling junk to macho males and hip females. The only exception is baseball, which is too much like watching grass grow. There is a pitcher, a batter, a catcher; and, very occasionally, some other players are briefly involved.

While I was in the hospital on Saturday, I watched the Argentina-Iran game in the morning. I was impressed. Despite the fact that the Argentinians won it 1-0 (superstar Lionel Messi finally came alive), it was beautiful to see the ball handling. The Iranian goalkeeper, Alireza Haghighi, frustrated all of Argentina’s many shots at goal until late in the Second Period. It was beautiful to watch the action, from the setup in the backfield to the elegant passing back and forth, along with the numerous interceptions that forced the other side to begin all over again.

The thing I loved was that something was always happening, like waves starting far out in the ocean and crashing on the shore.

Why do I love soccer football so much? For one thing, it was a tie to my father which I remember with great fondness. Elek (Alex) Paris and his brother Emil were identical twins who played the same position in the semi-pro nationality club teams of the 1930s. There were stories from my youth about my father forcing a referee to swallow a whistle (while inhaling to blow it), requiring him to pull it out by the lanyard while choking. Numerous players told me of my father’s powerful kicks that broke other players’ legs.

In the long run, I think that soccer football will replace the mayhem of American armored football. Parents just don’t want their sons to have to deal with concussions leading possibly to death or other serous head injuries. The next generation will be much more receptive to the game—unless they have to play someone like Elek Paris.

The main reason is that games can end in ties. Americans don’t like ties. When the USA-Portugal match ended in a 2-2 tie, newspapers around the country weighed in and harshly criticized the American effort. That was too bad, because the US really outplayed Portugal: Unfortunately, they left a brief opening for Ronaldo to set up a strike at the net. It didn’t matter to me: The Americans played a great game that showed that they deserve their 11th place world ranking. (“What only 11th place?” say the critics.) They’ll be better anon. Whether they ever reach the top spot is a different matter. First they have to pay some dues.

Another thing that drives many American fans crazy is the “expandable clock” of regulation play. A game runs 90 minutes, but referees can add minutes at the end for injuries and whatnot. In the US-Portugal game, there was a time-out at the end of the First Half as a water break. The jungle city of Manaus was hot and sticky, and the players were seriously drenched and dehydrated. In the end, the game ran approximately 95 minutes. It’s not over until the referee whistles the game over.

Finally, many Americans want more bathroom and snack breaks. Well, then, they can watch baseball, which is a lot of nothing—or some other sport with numerous breaks for ads.