Home » film » The Middle Ground Between Light and Shadow 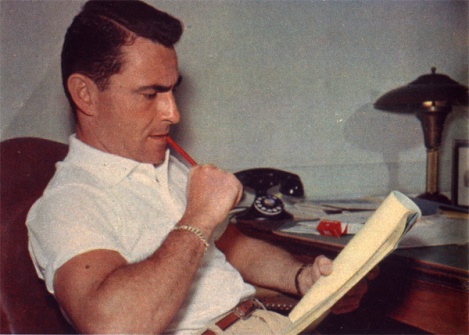 “There is a fifth dimension, beyond that which is known to man. It is a dimension as vast as space and as timeless as infinity. It is the middle ground between light and shadow, between science and superstition.” It is this middle ground that television writer Rod Serling ruled in he years between 1955 and 1975, when he died at the age of 50 of a heart attack.

After the Second World War, Americans were delighted they had won, but frightened by the devil’s bargain we had made with the atomic bomb. And once the Russians were able to not only produce their own super weapons but match us megaton for megaton, there was a sick feeling in the pit of our stomachs. I remember that period vividly, especially around the time the Berlin Wall was erected. Between then and the Cuban Missile Crisis of 1962, I was convinced that the world would end in mutual nuclear destruction.

Apparently Hollywood thought so, too. There were films like Them (1954) about giant ants affected by nuclear radiation; The Giant Gila Monster (1959); and the many films of Bert I. Gordon such as The Amazing Colossal Man (1957) and Village of the Giants (1965). The uncertainty spread to visitors from outer space who may or may not have been drawn to us by our discovery of nuclear power. The Day the Earth Stood Still (1951) and The Thing (1951) are classical examples.

It was into this world that Rod Serling came with his great television series, The Twilight Zone. He scripted many of the episodes himself, and it quickly became evident that he was a master of the genre. Today alone, I saw four episodes at the Paley Center for Media in Beverly Hills. The best of the stories was “And When the Sky Was Opened” (1959) starring Rod Taylor about three spacemen who crash land back on earth after their ship temporarily disappeared from radar screens. The three not only start disappearing one by one, but all memory of each one is wiped clean as if he never existed, both from the minds of the people who knew them and from the documentary record of their existence.

In my opinion. The Twilight Zone is one of the best five shows ever to appear on TV. Some day, I hope to buy all the episodes on DVD (which costs a pretty penny) because I know that the stories are great and will always affect me every time I see them.

2 thoughts on “The Middle Ground Between Light and Shadow”