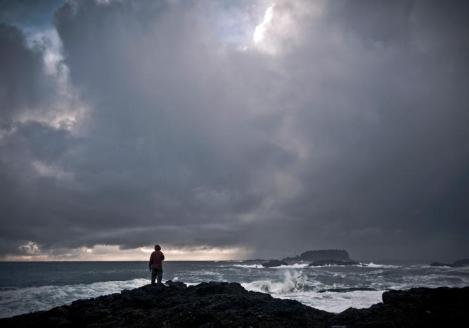 I have been reading G. K. Chesterton’s early book, Twelve Types (1902), and found this fascinating discussion of Byron’s curious joy in … pessimism?

Now Byron had a sensational popularity, and that popularity was, as far as words and explanations go, founded upon his pessimism. He was adored by an overwhelming majority, almost every individual of which despised the majority of mankind. But when we come to regard the matter a little more deeply we tend in some degree to cease to believe in this popularity of the pessimist. The popularity of pure and unadulterated pessimism is an oddity; it is almost a contradiction in terms. Men would no more receive the news of the failure of existence or of the harmonious hostility of the stars with ardour or popular rejoicing than they would light bonfires for the arrival of cholera or dance a breakdown when they were condemned to be hanged. When the pessimist is popular it must always be not because he shows all things to be bad, but because he shows some things to be good. Men can only join in a chorus of praise even if it is the praise of denunciation. The man who is popular must be optimistic about something even if he is only optimistic about pessimism. And this was emphatically the case with Byron and the Byronists. Their real popularity was founded not upon the fact that they blamed everything, but upon the fact that they praised something. They heaped curses upon man, but they used man merely as a foil. The things they wished to praise by comparison were the energies of Nature. Man was to them what talk and fashion were to Carlyle, what philosophical and religious quarrels were to Omar, what the whole race after practical happiness was to Schopenhauer, the thing which must be censured in order that somebody else may be exalted. It was merely a recognition of the fact that one cannot write in white chalk except on a blackboard.

Surely it is ridiculous to maintain seriously that Byron’s love of the desolate and inhuman in nature was the mark of vital scepticism and depression. When a young man can elect deliberately to walk alone in winter by the side of the shattering sea, when he takes pleasure in storms and stricken peaks, and the lawless melancholy of the older earth, we may deduce with the certainty of logic that he is very young and very happy. There is a certain darkness which we see in wine when seen in shadow; we see it again in the night that has just buried a gorgeous sunset. The wine seems black, and yet at the same time powerfully and almost impossibly red; the sky seems black, and yet at the same time to be only too dense a blend of purple and green. Such was the darkness which lay around the Byronic school. Darkness with them was only too dense a purple. They would prefer the sullen hostility of the earth because amid all the cold and darkness their own hearts were flaming like their own firesides.

I am reminded of a curious form of tourism in Canada: winter storm watching, which reaches its peak at the Vancouver Island resort of Tofino.  When I am finished spending my winters working on tax preparation, I am tempted to take a room at Wickanninish Inn on Chesterman Beach some five miles south of Tofino and watch the storm and waves hurl themselves at me.

Chesterton got it right. I feel the same way.