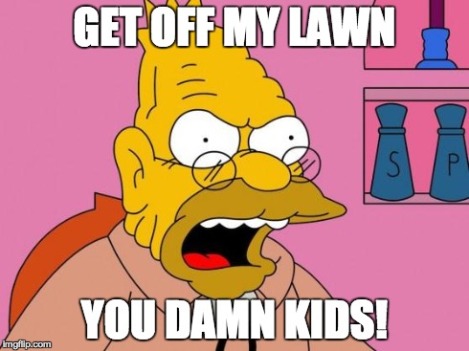 I’ve had it with politics.

Every time I post something about politics, I feel as if I’m yelling at a bunch of kids to get off my lawn. Particularly with the presidential race for 2016, I really have nothing new to add. I think Trump is a Fuehrer in training; Cruz, one of the Four Horsemen of the Apocalypse; and Rubio, a marionette dangling on a string. On the Democratic side, I distrust Hillary; and I like Bernie, but don’t think he’ll make it.

The next eight months will be a time of great ugliness and moral peril for this country. Before we get flushed down the commode of history, we will yet become the laughingstock of the world.

We’ve always overestimated ourselves, especially after we won the Second World War. After that magical moment, it was all downhill.

There, now I’ve said it all. I will vote of course, but have no further opinions about the race; and I don’t expect to be surprised. Why? I am deeply pessimistic when it comes to the American voter, who seems to look at the world around him as if it were a reality show on Fox.