In Quito, There Are Many Types of Police

One thing that my brother and I noticed when we were in Quito, Ecuador, last October was that there are many different types of police. We sat in the central Plaza de Independencia for upwards of two hours, watching the different types of police congregate and go their separate ways, only to be replaced by policia with different uniforms and different means of locomotion. We were particular amused by the Segway patrol that mostly wheeled around chatting with one another.

At one point, as we were going by in a taxi, we noticed a number of heavily armed military escorting several male and female officers into the Municipal Palace. They seem to have arrived there without any major mishaps, like having a Segway run over their feet.

Just a few blocks away, there were four cops with bright yellow vests. 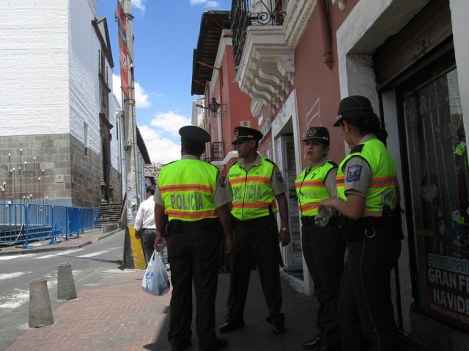 These Police Seemed to Be Guarding a Church (Rear Left)

All I could guess is that the creation of different government security forces was a form of mitigating the unemployment problem that seems to be endemic throughout South America.

Several times, we asked the police for directions. They were always very polite, even if they didn’t understand us. Fortunately, we didn’t look like bad guys; else, we would have been mobbed by policia wearing a variety of different uniforms. (It would have given them something to do for a change.)