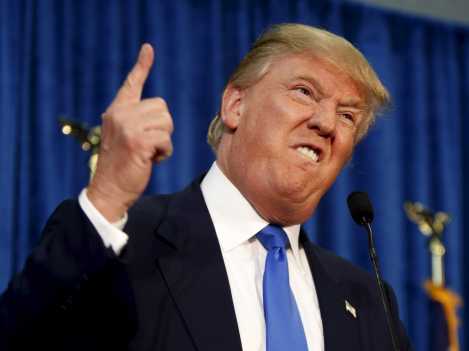 Promise Them Anything, But Give Them the Finger

It has not taken long for Americans to find out what they have in President Trumpf. During the campaign, a number of different positions were taken. Let’s face it: Many of them were contradictory. What we ended up with was lots of promises, few of which were kept. Our Presidente is not a particularly bright man whose political philosophy appears to be Up-Yours-Ism.

Unless you are either a billionaire or a tyrannical dictator, you are probably a pathetic loser. So, basically, Up Yours! Remember that famous White House Press Dinner at which Barack Obama lambasted Trumpf, who sat glowering in the audience, resolved to completely undo everything his predecessor ever did. (And he’s still trying to prosecute “Crooked Hillary.”) This is a man who wants to get even with everybody who ever mocked him—and that includes most of the American people. They don’t like me? Then, Up Yours!

Funny thing, though, it’s not always a good thing to have all your wishes come true. Look at the stories of Croesus and Midas. Trumpf lives all by himself in the White House, which he thinks is a dump, probably because it doesn’t have gold plumbing fixtures. His wife doesn’t want to live with him. He doesn’t trust anyone for more than the lifetime of a fruit fly. His only out is golf at various clubs he owns around the world. Plus, he must be aware that the wolves are gathering in an attempt to put an end to his presidency. But that only feeds the troll, to which his inevitable response is: Up Yours!

This is a new experience for the American people, being treated as a bunch of losers by a self-styled billionaire. How does he feel about those ever-declining poll numbers. Wait, never mind! That’s just fake news. Up Yours!