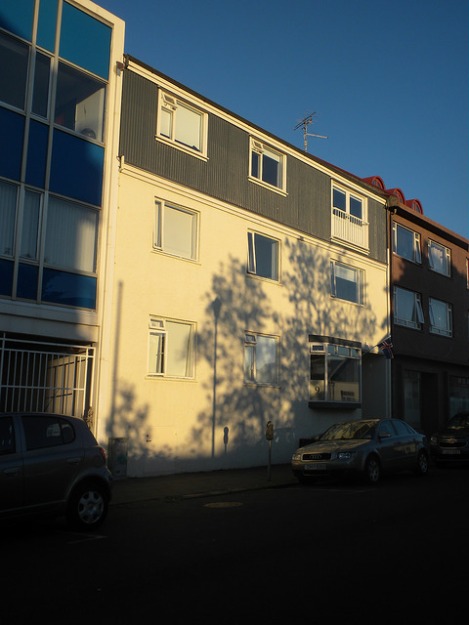 Now that we are fast approaching the darkest time of the year, my mind turns to my visit to Iceland in June 2013. In that Land of the Midnight Sun, I stayed out until midnight. When I returned to the Guesthouse Óðinn in Reykjavík around midnight, I snapped this picture. I was afraid I wouldn’t be able to sleep with all the light, but fortunately the guesthouse had good blackout curtains (which you can see on the upper left of the third floor in the above photo).

My first day in Reykjavík was a long one. My Icelandair flight from Toronto arrived early in the morning. I had to busy myself for eighteen straight hours before turning in. Otherwise, I would have awakened in the middle of the night—rarin’ to go. That way I managed to minimize the jet lag which otherwise would have bedeviled me. It was a good thing, too, because the next day I had an all day tour of the Golden Circle (Þingvellir, Gullfoss, Geyser, and the geothermal power plant at Hellisheiði on the return to Reykjavík.).