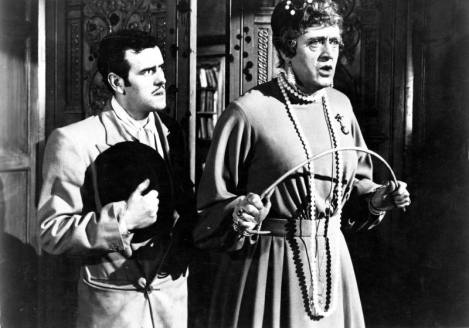 George Cole as “Flash Harry” and Alastair Sim as Headmistress Millicent Fritton in The Belles of St. Trinian’s

In honour of the Royal Wedding—wait, belay that!—I would like to honour the British for what they made me do in my formative years, namely, to laugh my head off. I just watched one of Martine’s favorite films at her side, The Belles of St. Trinian’s (1954). It starred the great Alastair Sim in two roles, as the Headmistress of St. Trinian’s School for Girls Millicent Fritton and as her scapegrace horse racing tout brother Clarence. You may recall Sim as Ebenezer Scrooge in the best version of Charles Dickens’s A Christmas Carol (1951).

It suddenly hit me that I have never written about the British film comedies that help sustain me through high school and college, while I was suffering from a pituitary tumor that almost killed me in 1966. Consequently, I have put together a list of ten films that I loved and that made me laugh:

So you can wake up in the middle of the night at watch the pre-game show for the Royal Wedding, or you can laugh your ass off. Guess what I would recommend!