This is one of an occasional series on alternatives to the “giants” of modern art, particularly the abstract expressionists whose work I so dislike. Today I write about Miroslav Tichý of the Czech Republic, who made his own cameras. His subject? The women of Kyjov, the town where he lived. None of the pictures for which he is noted are sharp. He seems to be intent on seeing how fuzzy his pictures can be and still communicate what he wants them to. 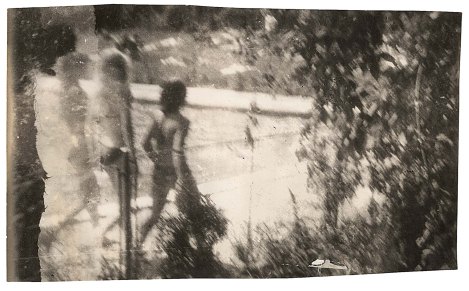 The above photograph is a good example. It shows three young bikini-clad girls walking around the edge of a swimming pool.  It is framed by surrounding foliage including the trunk of a tree at left and bushes and leaves on three sides.

Here we have what, in the hands of a realist painter, would be a classical nude partially obscured on the lower left by an unidentified object. At first, I thought it was her leg; but it couldn’t be.

Looking at his pictures, I cannot deny that they have a certain elegance and beauty. Tichý described his methods tersely in two unconnected sentences:

As American urban slang shows, you can be bad and good at the same time.