Perhaps the saddest thing about Southern California is that so much that has been written about the area comes from clueless East Coast authors who whose work is characterized by a kind of extreme cultural tone-deafness. If you want a true picture of Los Angeles, you have to read Eve Babitz who, alone, seems to understand what the city in which I live is all about. In her story “Self-Enchanted City” in her story collection Black Swan, she writes:

When people would first arrive from New York, they’d say stuff like “This place is full of fruits and nuts and you have no seasons.” So I knew they saw through the cheap thrills of shallow sunshine and were principled easterners determined to be unimpressed. But after a few weeks, even they would show up at Barney’s Beanery driving a brown Porsche, and they’d move into one of those Snow White wishing-well houses where all they could hear were birdies in the trees and all they could see were hollyhocks, roses, and lemon blossoms. And then they’d undergo a kind of molecular transformation, losing all their winter fat, their bad teeth, and their attitude that life was about artists being screwed by “the establishment.” And if they were fast enough on their feet, they’d soon become the establishment themselves. Or, at the very least, they’d wind up writing screenplays about Marxist good guys disguised as cat burglars. 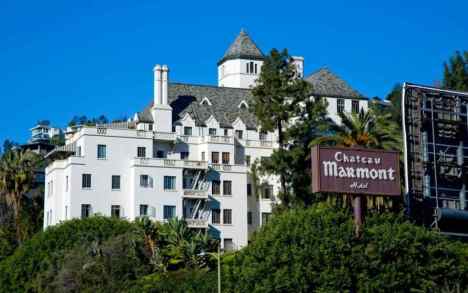 The Chateau Marmont, Archetypal Hollywood Hotel on the Sunset Strip

Eve neglects to mention that they still kept one foot in the East by wearing a New York Times baseball cap. Earlier, she describes what has happened to Hollywood:

But for anything to age gracefully, eternal vigilance is necessary, and Hollywood has not been carefully tended. It has been knocked down flights of stairs, abandoned, left for dead, and sold into slavery. Still, if you ask me, some parts are just as beautiful as my dream version—even more beautiful if you subscribe to the Tennessee Williams decadence-as-poetry theory that ravaged radiance is even better than earnest maintenance.

I am only about a third of the way into Black Swan, but am continuing to make further discoveries every page.