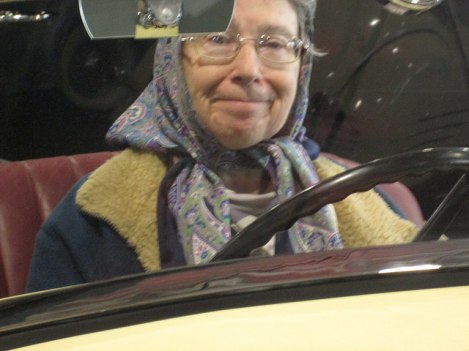 Martine at the Automobile Driving Museum in El Segundo

This morning, as I was watching the movie Odds Against Tomorrow (1959), the doorbell rang. I thought, “Who could that be? Is it the Jehovah’s Witnesses? LDS Missionaries?” I opened the door to find Martine with her suitcase. She had taken buses from South Central LA to Union Station, and from there the 704 bus, which drops her off two short blocks from home.

Martine had stayed at a women’s shelter run of Volunteers of America near Broadway and West 88th Street, in the heart of South Central. The facility contained some forty bunk beds on each of two floors, sleeping some one hundred sixty women. Martine, who is by no means a sound sleeper, had three nights of no sleep on a mattress that was too soft for her bad back. She had no complaints about the way she was treated or the food that was served, but she could not tolerate another sleepless night. Fortunately, I had purchased for her a senior TAP card with a few dollars of stored value which enabled her to take buses at a discount without having to worry about exact change, so she could take a bus virtually anywhere in the county at will.

During her absence, I was less worried about her because I knew she was being well cared for. Plus she called me three times during her three day sojourn at the center, though I was not able to call her. I suspect that most of the women at the shelter were there because they had been abused by husbands and boyfriends. How were the receptionists to know that I was not an abuser?

Martine’s “escapes” are a symptom of her depression. All I can do is demonstrate to her that I continue to love her and that she can trust me. In all her actions, there is no sign of enmity or exasperation with me. As she stood at my doorstep with her luggage, there was a big smile on her face. I can accept that.