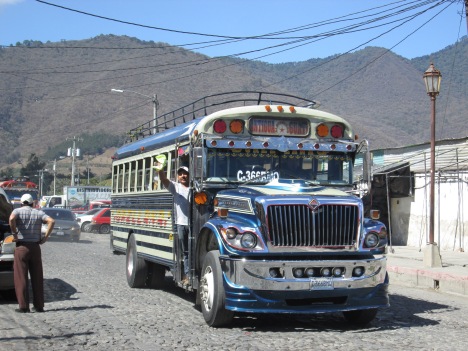 “Chicken Bus” with Conductor Hanging Out the Door

Old American school buses have a second life in Guatemala. They are imported, gussied up according to local taste, and converted into what are lovingly called chicken buses, because presumably the local Maya could transport pigs and chickens as well as themselves. They come with a driver and a conductor, who hangs out the front door as in the photo above, calling out the destination. Anyone could stop one of these second class buses by simply hailing it and climbing aboard. The conductor collects the fare and makes change, sometimes making the passenger wait until more fares are collected.

I did not take any chicken buses in Guatemala because of the potential for hold-ups and assorted violence. The guidebooks say to take tourist shuttles instead, even though they cost considerably more. Also, I do believe the language used by the driver and conductor is usually the local dialect of Mayan. 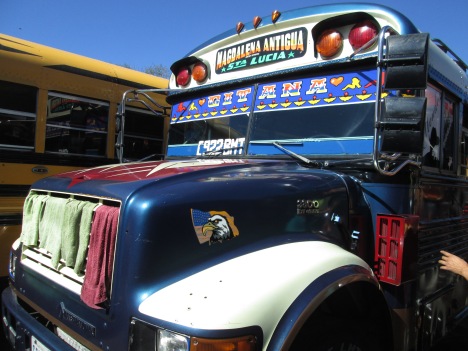 A Chicken Bus to Magdalena and Santa Lucia

I noticed that the numbers on the front or rear windows of buses (and some cars) merely repeat the license plate in larger letters (for the convenience of witnesses and the police?),

All the buses shown on this page were taken in Antigua near the second class bus terminal. The buses in Eastern Guatemala are different. But more about that later.