The House of the Turtle at Uxmal

I have always had a special feeling about turtles. That comes from having lived at the edge of a desert for the last half century suffering from a chronic lack of rain. I strongly suspect that the Maya of the Puuc Hills (redundant: Hill Hills the way that Torpenhow Hill in England means Hillhillhill Hill) felt the same way. One of the simplest, most classical and beautiful structures at Uxmal if the House of the Turtle.

It is named after the row of carved turtles that appear along the top edge: 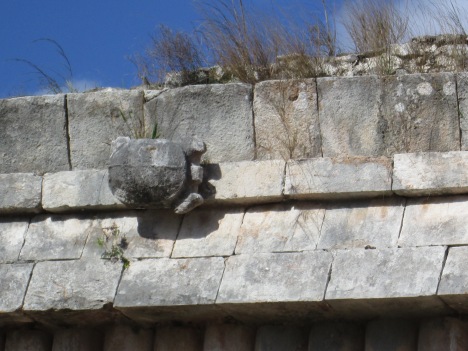 As I have mentioned previously, the hills of the Puuc are separated from the underground rivers of the Yucatán Peninsula by several hundred feet of impenetrable limestone. The Maya of the Puuc had to dig cisterns (called chultunes) which they hoped would fill with water during the rainy season. In good years, they did. But when a series of dry years came in the Ninth Century A.D., the Maya just walked away from Uxmal. Why obey the local god/king and get a hernia hauling stones to build new structures when they might easily die of hunger or thirst?

All the stones of Uxmal—and, for that matter, all the Maya sites—were hauled by human labor. There were no wheeled conveyances because there were no wheels, and what would be the point anyway when there were no draft animals to pull them over roads which they would have to build of other heavy rocks in the first place?

When you think of it that way, you can understand why the Maya just walked away from their ceremonial centers and changed their way of government. It was a miracle that they allowed themselves to be used for so many hundreds of years hauling rocks and putting them into place—even creating such magnificent sites as Uxmal—for little reward in their hardscrabble lives.

The Maya who built Uxmal are still in the neighborhood: It’s just that they are not quite so much involved in major engineering projects. And their homes, if built of stone (or, more likely, cinder blocks) use trucks to do the heavy hauling.