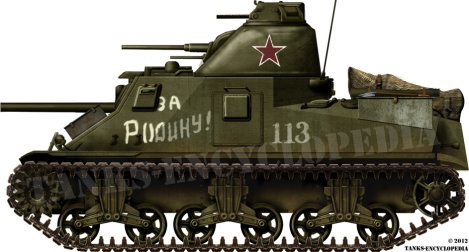 I have just finished reading David M. Glantz and Jonathan M. House’s The Battle of Kursk, probably the authoritative study of the campaign that turned the tide on the Eastern Front against the Germans. (For some reason, I always spend part of every summer boning up on military history, particularly the American Civil War, the Roman legions, and the Second World War on the Eastern Front.)

The Soviets were greatly helped by the Lend-Lease program that provided the non-Fascist combatants in the war with surplus military equipment. Russia was the beneficiary of $11 million worth of war supplies (though Britain got the lion’s share), including planes, tanks, and miscellaneous trucks and other military vehicles. Even Britain and Canada joined in, as shown in the below photo:

Of course, things didn’t always go smoothly. You might be interested in reading a memo by a Comrade Korobkov relating to miscellaneous problems with the tanks arriving by convoy to Murmansk.

The Glantz book contains a couple of amusing nicknames assigned by the Soviet troops to the gifted tanks. Because of its odd layout and insufficient armor, the M3 Lee was referred to as a “grave for seven brothers.” The unreliable and flammable British Valentine and Matilda tanks were called “field crematoriums.”