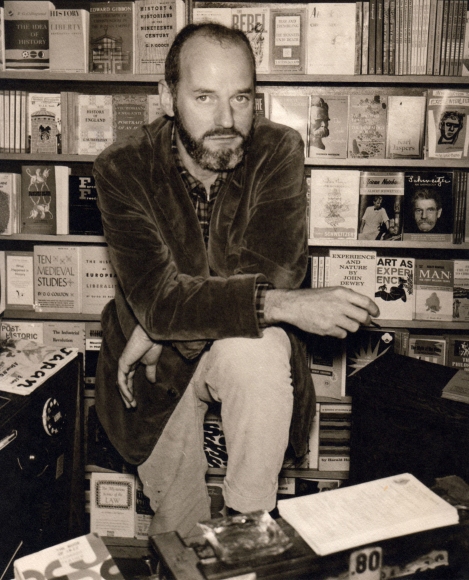 Poet and Publisher Lawrence Ferlinghetti in the Late 1950s

I met Lawrence Ferlinghetti in person over fifty years ago when he came to Dartmouth College for reading of poems from his book A Coney Island of the Mind. The picture above was taken in the late 1950s, and I saw him somewhere between 1962 and 1966 when he still looked that way.

My fellow students asked the usual bozo questions—based primarily on his association with the beat generation writers—and he fielded them so effectively that I kept my mouth shut. After all, I had never heard of the man before he showed up, though I bought a copy of A Coney Island of the Mind the next day.

Ferlinghetti still lives in San Francisco, though he no longer actively runs the City Lights Bookstore. It is his misfortune to be conflated with the Beatnik poets, though his primary interaction with them was as publisher of many of their works. According to an interview with Robert Scheer of Truthdig.Com:

I was a straight man keeping the store back home,” he says cheerfully. “I was leading a respectful married life on Portrero Hill. These guys were much too far out for me. I didn’t go out on the road with them. And I came from a former generation. When I arrived in San Francisco I was still wearing my beret from Paris, and we were known as bohemians … people who led an unconventional creative life before the Beats came along.

We must not forget that Ferlinghetti is also a major U.S. poet in his own right, as is evident in his poem “The World Is a Beautiful Place”: 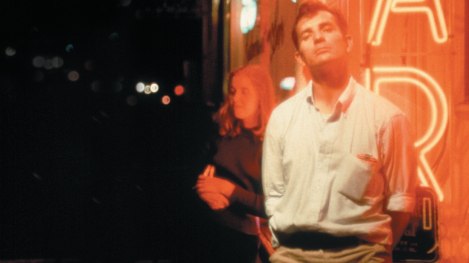 The following is an itemized list in its entirety of how to write modern prose like a beatnik by Jack Kerouac. It was published in The Evergreen Review, Volume 2, No. 8, in 1959. As usual, Jack varies between the profound and the mundane, all mixed up like:

The above is reprinted in Fred W. McDarrah’s book Kerouac & Friends: A Beat Generation Album, a not bad introduction to the movement together with photos of its main characters.

If there is a lot of unevenness in the whole beat vision, I think you can see why. 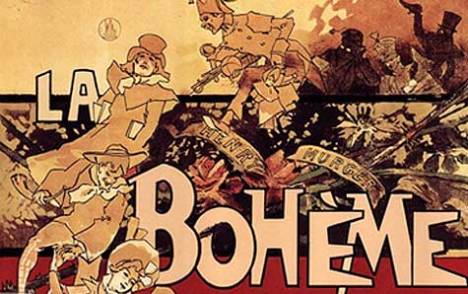 A Full Fifty Years Before the Opera Came the Novel

A hundred years before Jack Kerouac, Allen Ginsberg, and the Beat Generation came into being, there were the “original” Bohemians—although, possibly, one could make a case for tracing them all the way back to François Villon in the 15th Century—popularized by Henri Murget in Scènes de la Vie de Bohème (or Bohemians of the Latin Quarter). We are probably much more familiar with the operas based on this popular novel of the 1840s, including Giacomo Puccini’s La Bohème. Ruggiero Leoncavallo also wrote an operatic version, and the Broadway musical Rent is loosely based on  Murger’s novel of 1846-1847.

The big difference between the Beats and Murget’s Bohemians is that, while the Beats were more heavily into booze and drugs, the Parisian artists and artistes of the 1840s were more into surviving. The whole picture of the starving young artist really came into fruition around then. We see pieces of it in Honoré de Balzac’s Illusions Perdues (Lost Illusions) and some of his other works, but it was Murger who popularized it, while graciously acknowledging Balzac’s contribution.

In Murget’s novel, there were four main heroes: Rodolphe, Marcel, Colline, and Schaunard, along with their mistresses, especially Mimi and Musette. What distinguishes Murget from Balzac is that he is nowhere near as dark. His Bohemian artists are impoverished, but generous and good-hearted. Although it has a “where are the snows of yesteryear” (itself a quote from Villon) sadness to it, we do not feel there is any evil present, except perhaps in the landlords who persist on asking for rent. As Marcel cynically says at one point toward the end:

It is no longer possible for us to continue to live much longer on the outskirts of society—on the outskirts of life almost—under the penalty of justifying the contempt felt for us, and of despising ourselves. For, after all, is it a life we lead? And are not the independence, the freedom of mannerism of which we boast so loudly, very mediocre advantages? True liberty consists of being able to dispense with the aid of others, and to exist by oneself, and have we got to that? No, the first scoundrel, whose name we would not bear for five minutes, avenges himself for our jests, and becomes our lord and master the day on which we borrow from him five francs, which he lends us after having made us dispense the worth of a hundred and fifty in ruses or in humiliations. For my part, I have had enough of it. Poetry does not alone exist in disorderly living, touch-and-go happiness, loves that last as long as a bedroom candle, more or less eccentric revolts against those prejudices which will eternally rule the world, for it is easier to upset a dynasty than a custom, however ridiculous it may be. It is not enough to wear a summer coat in December to have talent; one can be a real poet or artist whilst going about well shod and eating three meals a day. Whatever one may say, and whatever one may do, if one wants to attain anything one must always take the commonplace way.

Unfortunately, not many people today read Murger. It is interesting, however, to trace an idea back to its origins; and Murger makes for pleasant reading. You can find a free English translation on Gutenberg.Com. 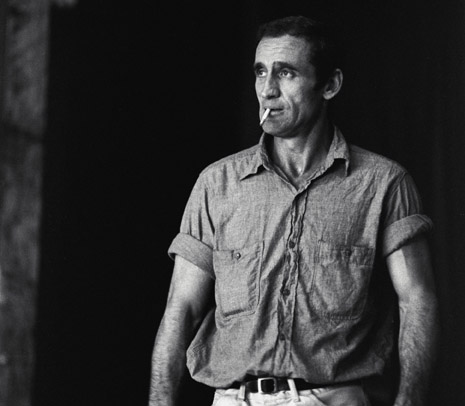 He was the real hero of the Beat Generation. Variously called Dean Moriarty and Cody Pomeray by Jack Kerouac, Hart Kennedy by John Clellon Holmes, and in Allen Ginsberg’s “Howl” (1955), “N.C, secret hero of these poems.” It is almost as if the whole Beat moment were mainly about Neal Cassady (1926-1968), a petty criminal who served time in prison for car theft, shoplifting, and fencing of stolen goods. Although he never published a word during his lifetime, it was Neal who acted as a catalyst for his friends. As Jack Kerouac wrote in On The Road:

He was simply a youth tremendously excited with life, and though he was a con-man, he was only conning because he wanted so much to live and to get involved with people who would otherwise pay no attention to him…. Somewhere along the line, I knew there’d be girls, visions, everything; somewhere along the line, the pearl would be handed to me.

Kerouac described his friend’s influence on his writing style “as in a rush of mad ecstasy, without self-consciousness or mental hesitation.” You can see some of this in this YouTube interview at the City Lights Bookstore in San Francisco between Cassady and Allen Ginsberg:

Well it’s about time you wrote, I was fearing you farted out on top that mean mountain or slid under while pissing in Pismo, beach of flowers, food and foolishness, but I knew the fear was ill-founded for balancing it in my thoughts of you, much stronger and valid if you weren’t dead, was a realization of the experiences you would be having down there, rail, home, and the most important, climate, by a remembrance of my own feelings and thoughts (former low, or more exactly, nostalgic and unreal; latter hi) as, for example, I too seemed to spend time looking out upper floor windows at sparse, especially nighttimes, traffic in females—old or young.

It is not so much a well-constructed unit of thought as an onrush, barely keeping on the rails.

And, in the end, it was the rails that did him in. He was in San Miguel Allende in Mexico in 1968 when he drank too much alcohol and took Seconal, then went walking along the rails on his way to the next town. That’s where he was found, unresponsive, dying in the local hospital. He could have died of an overdose or of renal failure or of “exposure.” 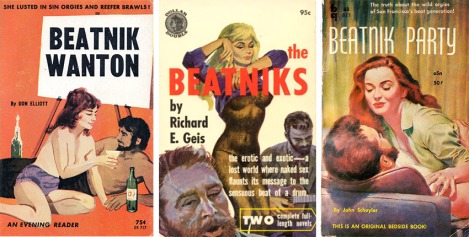 It All Started as a Friendship…

The so-called beat generation actually started as a bunch of friends who liked to get together to talk, drink, smoke marijuana, and—perhaps—even have some casual sex along the way. The only difference between Jack Kerouac, Allen Ginsberg, John Clellon Holmes, and millions of other groups of rambunctious youngsters was that some of them had talent.

Last month, I read Kerouac’s Big Sur; and I am now reading John Clellon Holmes’s Go. The original beats would probably think of me as some sort of stick-in-the-mud, but I admire their all-out pursuit of freedom, even when it leads—as it did for many of them—to disorder and early sorrow. In Big Sur, Kerouac turns to drink the way that most people turn to inhaling oxygen. In Go, the action is frenetic and endless, especially once Hart Kennedy [Neal Cassady] joins them:

Ben’s connection had not showed; the sweet cologne fragrance of benzedrine about him and the discoloration of his lips suggested that there may have been no marijuana connection at all, but somehow that did not matter. Continuance was what concerned them, and where to go next. After a number of improbable ideas (places that would not be open, people who would not be up), they settled on a friend of Ben’s, who lived on One Hundred and Twenty-third Street and Amsterdam Avenue, who would “surely have liquor.” Although at another moment this would have seemed unlikely to them all, now they believed it with bland innocence as though all discord in the universe had been resolved by their harmony, which, in any case, did not depend on such details.

Below is a photo of Jack Kerouac with Allen Ginsberg, who was probably the most talented writer of the lot:

In the months to come, I plan to read more works by this unique “band of brothers” who had an outsize influence on the middle of the Twentieth Century, even if, as the movies and lurid paperbacks above show, it was mostly misinterpreted.