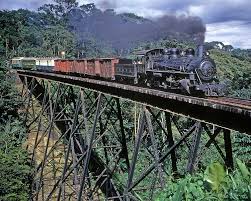 The Rail Line Between Tecun Uman and Guatemala City

I have read Paul Theroux’s The Old Patagonian Express: By Train Through the Americas several times. It got me interested in visiting South and Central America in the first place; and I keep tryi9ng to relive the experience of reading it the first time. Back in the 1970s, there was still passenger rail service in Guatemala. Now there are only railroad museums with rusting locomotives. The following is the author’s take on recent Guatemalan history—which is still largely true.

I had a political reverie on that train [the one between Tecun Uman and Guatemala City]. It was this: the government held elections, encouraged people to vote, and appeared to be democratic. The army appeared to be impartial, the newspapers disinterested. And it remained a peasant society, basically underfed and unfree. It must perplex any peasant to be told he is living in a free country, when the facts of life contradict this. It might be that this does not perplex him; he has every reason to believe, in accordance with the evidence, that democracy is feudal, a bureaucracy run by crooks and trigger-happy vigilantes. When one sees a government of the Guatemalan sort professing such high-mindedness in its social aims and producing such mediocre results, one cannot be surprised if the peasant concludes that communism might be an improvement. It was a Latin American sickness: inferior government gave democracy an evil name and left people with no option but to seek an alternative.

On this election day (for me, the California Primary), I am reminded of one of the things that Donald Rumsfeld said in which I actually believed: Democracy is messy, sometimes incredibly so. This horrible election year of 2016 brings us a contest between two politicians that many Americans would readily damn to the infernal regions.

But we seem to have bought this whole two-party system thing. But what happens when people start to lose faith in both parties? Just because I donated to Barack Obama’s 2008 and 2012 campaigns, my mailbox is full of solicitations from Debbie Wasserman Schultz and her minions. Although I tend to vote Democratic, I still consign those solicitations to the circular file with as much alacrity as an ad from Herr Trumpf.

Why would I donate money to a political party? I vote for candidates, not parties. And if the party cannot produce a good candidate, why then, bugger the party!

Yet I still vote. There I was at the Stoner Recreation Center at 7:15 this morning to vote for Bernie Sanders, despite knowing that Hillary Clinton would clean his clock. That doesn’t matter: If she gets in, then she has to listen to the forces behind Sanders or go down to defeat to the candidate that Jon Stewart would refer to as Fuckface von Clownstick. That would be … very … bad.