E-Readers Are OK, but Smart Phones Are Not

Once I saw a website somewhere about all the devices that smart phones will render obsolete. On the list were e-readers, such as Kindle and Nook. I do not believe, however, that people with smart phones will be reading Proust’s In Search of Lost Time (in seven volumes) anytime soon. I do not even think that they will be reading many shorter books, such as 10 Haikus for the Next Millennium.

Just because you can read books on a smart phone does not mean that you will ever want to. There are four reasons for this:

I remember when Gutenberg and other websites put the complete texts of thousands of books online. In the last ten years, I have succeeded in reading only one book online: Sir Richard F. Burton’s Falconry in the Valley of the Indus. It is a relatively short book, and I can tell you it was a real chore, what with the glareback from my monitor. I believe this may also be a problem on iPads and other pad devices.

Over the years, I have long suspected that those people staring at their cellphone screens while walking are probably not reading Moby Dick.

With Every New Technology, There Is a Massive Die-Off

Little by little, I am becoming aware of a tendency in our culture to downplay everything that is before the Internet. Wikipedia and Google are so convenient that we tend to ignore older sources of knowledge. And now that libraries are trashing many of their old books and periodicals and replacing them with computers, there is a real danger that many of the old sources that used to pass for knowledge are slowly disappearing.

For example, I have many books that pre-date the ISBN code. When I read one of them, I have some difficulty describing the book to GoodReads.Com because the likelihood is that there is no reference to the edition I have. And when I try to sell the books on Half.Com (which is owned by eBay), I can’t enter the book because it lacks the ISBN code used to identify the edition. It’s actually keeping me from reading my essays by Sainte-Beuve or many of the hundreds of Oxford World Classics I own in hardbound. Ever since I got in the habit of reviewing everything I read, I tend to hesitate with some of my older editions. Just in front of me, for example,  is a 1926 Alfred A. Knopf edition of Arthur Machen’s The Canning Wonder. I could review the book on Goodreads only if I answer a questionnaire about the edition. If I wanted to sell it on Half.Com, I’d be out of luck.

Most at risk is the history of our civilization based on original archival materials that date back to the Middle Ages. Fortunately, the Europeans are willing to spend the money (in most cases) to protect their history. But what about the Americans? All it would take is for some idiot like Ted Cruz or Rand Paul to sniff at supporting libraries, and millions of words of our country’s history would go by the wayside.

But what about Google Books, you might ask? It is a noble effort, but only a small percentage of old books have been scanned. I collect the works of Sir Richard F. Burton (no relation to the actor). He’s not exactly a popular item, but he is one of the most exciting explorers and travelers of the Nineteenth Century. I can find Burton’s Two Trips to Gorilla Land and the Cataracts of the Congo, but only Volume I has been scanned. The same is true for his Exploration of the Highlands of Brazil. Oh, the books will still be around, but they will be fabulously expensive. (On the other hand, I have been able to find some Burton titles on Gutenberg.Com that I could never afford to buy in print—so the argument cuts both ways.) 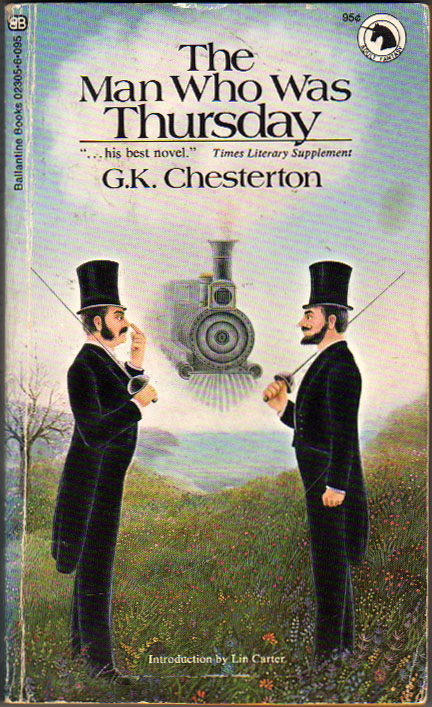 I am currently re-reading G. K. Chesterton’s The Man Who Was Thursday, perhaps his best work of fiction. I came to it first some forty years ago, and since then have read it two or three times. After going through all the Chesterton volumes at the Santa Monica Public Library—that took all of ten years—I decided to start collecting his work. At the outset, there weren’t many works in print. Fortunately, Ignatius Press of San Francisco started coming out with an edition of his Collected Works. To date, I have all the volumes that have been released so far: I say “so far” because they are still dribbling out at a rate of one or two a year.

Currently, all of Chesterton’s major works are in print, sometimes in multiple editions. It is only in some of the more abstruse titles such as GKC as MC, The Victorian Age in Literature, Sidelights of New London and Newer York, and William Cobbett that require some digging around. But Gutenberg.Com has full texts of more than forty of his works, including fiction, plays, essays, journalism, and poetry. (Click here and scroll about 40% of the way down.)

It isn’t easy to compile the complete works of someone who was so prolific as GKC. His short pieces appear in newspapers and magazines from all over the English-speaking world, many in publications which no longer exist. Fortunately, most of his books are still around. In fact, I would have been delighted (and bankrupted) if such were the case in 1986. I regularly scour the listings in eBay, but only once or twice a year can a find a title I don’t have on my shelves in some form.

In addition, Chesterton is also widely available cheap or free for readers of Kindles and other e-books.

Before I go any further, let me answer one question that might be hovering at the back of your mind if you’ve gotten this far: What is the point of reading Chesterton at all? I mean, didn’t he convert to Catholicism and write a whole lot of religious books?

Yes, he did—among scores of books not relating to religious subjects—despite the fact that the Catholic Church is considering canonizing him as a saint. Having read widely in both his religious and secular works, I think they are equally of value. His biographies of Saints Francis and Thomas Aquinas are well worth a read, as well as The Everlasting Man. He is probably most famous for the Father Brown stories, in which the hero/detective is a Catholic priest. Although his Catholicism certainly enters into the stories, it is not in an obtrusive way. (There is also an excellent 1954 British comedy called The Detective, starring Alec Guinness as Father Brown.)

What I like most about Chesterton is the way he exorcised his own demons, and he had a few. The early years of the Twentieth Century were an anxious time in Europe, with a nasty arms race between Britain and Germany, and the prospect of a war looming in the near horizon. At the same time, it was the high water mark of both anarchism and international socialism. And that was not to mention any personal demons lurking in the writer’s heart. GKC faced his demons with optimism, humor, and style. He did it so successfully that even today I will read an obscure Chesterton if I am feeling down in the dumps. In his own way, he is much like P. G. Wodehouse in that regard—but that is another story.

There was a time when I would have paid a hundred dollars for even a ratty copy of Sir Francis Galton’s The Art of Travel, or Shifts and Contrivances Available in Wild Countries (1872). This book was a vade mecum for Victorian explorers, such as Sir Richard Francis Burton, whose works I collect and love to read. Other books that Burton and his fellow Victorian explorers took with them on their jaunts into the wild places of the world are Randolph Barnes Marcy’s The Prairie Traveler: The 1859 Handbook for Westbound Pioneers (Burton himself edited later editions) and Harriet Martineau’s How to Observe: Morals and Manners (1838).

Now how much do you suppose these rare titles would cost you today? Remember, these books (even the one on the Prairies of North America) were taken into the darkest parts of Africa and South America. According to Monte Reel’s article entitled “How to Explore Like a Real Victorian Adventurer,” reprinted in The Best American Travel Writing 2012, the answer is Zero. Zip. Nil. Provided, of course, you have a Kindle e-reader.

If you do, you can easily put together a library of works which are no longer under copyright for nothing or next to nothing.

Oh you can expect to pay for the latest Stephenie Meyer twinkling vampire books or the latest New York Times best-sellers.

Now, you ask yourself, why would I be interested in these old general guides on travel to unexplored areas? The fact of the matter is that I love old travel books. Burton’s own First Footsteps in East Africa, or An Exploration of Harar (1855) and his voluminous A Personal Narrative of a Pilgrimage to Al-Madinah and Mecca (1855-56), in which he disguised himself as an Arab and did all the Holy Places of Islam, are two of the most exciting books ever written.

Going farther afield, there are writers like W. H. Hudson on Argentina and Uruguay, H. M. Tomlinson’s The Sea and the Jungle (1912) about a voyage to the interior of Brazil; George Gissing’s By the Ionian Sea (1901) about a trip along the heel and sole of the Italian boot; and Captain Irving Johnson’s The Peking Battles Cape Horn (1932) about the last big sailing ship through the storms of Cape Horn.

One of these days, I will put together a more organized list of my favorite travel books—but that will take a little time!