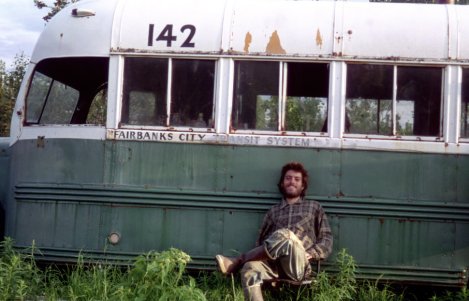 In August 2017 I wrote a post entitled “Fairbanks 142” in which I talk about the end of Chris McCandless, who died isolated in the Alasks wilderness while living in an abandoned Fairbanks City bus.

The problem was that thanks to a book by Jon Kracauer entitled Into the Wild, a number of visitors to the bus site either had to be rescued or even lost their lives while staging a pilgrimage to the site of the bus. According to a CNN story:

In April 1992, McCandless hitchhiked to Alaska, where a man dropped him off at the head of the Stampede Trail, according to the book. A few days later, he came upon the abandoned bus and lived there for about three months before deciding to head back to civilization.
As he attempted to make his way back, he arrived at a crossing of the Teklanika River. But because the river was running fast and high from rain and the snowmelt from glaciers, he was unable to make his way across, according to Krakauer.
Defeated, he turned around and headed back toward the bus, where he survived for about a month before succumbing to death in August 1992.
Hikers from around the world attempt to retrace McCandless’ steps every year, but many have failed and have had to be rescued. Some even died.
Last February, firefighters and Alaska state troopers rescued five Italian hikers on the Stampede Trail as they were returning from visiting the abandoned bus. Less than a year before, a Belarus woman died on the trail trying to cross the Teklanika River to visit the bus with her new husband.

Finally, the State of Alaska decided to airlift the ruined bus before more tax dollars had to be spent rescuing pilgrims. They haven’t decided what to do with it yet, though I think it would make a fine addition to one of the state’s museums—acting as a warning to wilderness buffs who are tempted to follow in McCandless’s footsteps.