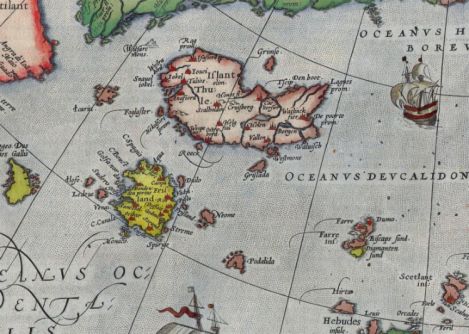 It Looks As If It Is South of Iceland

Until late in the Sixteenth Century, maps of Europe had a largish island called Frisland (also called Frischlant, Friesland, Frislandia, or Fixland) situated south of Iceland. It is thought that an Italian mapmaker named Nicolo Zeno was first responsible for the placement of the imaginary island on his charts in 1558. Then, in 1573, the Fleming Abraham Ortelius picked it up for his maps, followed by Gerard Mercator (he of the projection) of Duisburg. In 1576, Martin Frobischer thought he was in Frisland when, actually, he had overshot it and found himself in Greenland.

I am indebted to Benedikt Jóhannesson of the Iceland Review for turning me on to this existence of this cartographic canard. I remember standing on the farthest southern point of the Westmann Islands in Iceland and looking south. I saw quite a few small, rather volcanic rocks to the south—but nothing as large as Frisland is represented to be. Perhaps it’s the original Fantasy Island.

Curiously, this part of the ocean lies along the Mid-Atlantic Ridge. There have been volcanic islands that arose from the bottom of the sea, only to subside or be eroded away after the eruption that created them spent its fury. Perhaps someone reported some such island—though no way that large—and some mapmakers picked it up and embellished it a bit. A good example of such an island is Ferdinandea, between Sicily and Tunisia, which appeared and disappeared several times. It lasted long enough for several countries in the Nineteenth Century to dispute its ownership.