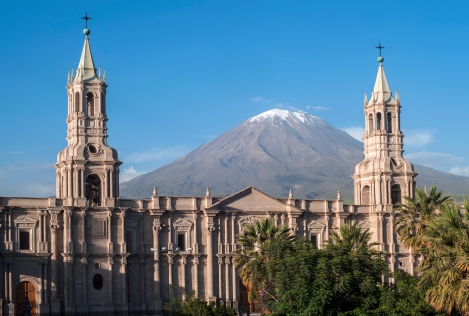 The Volcano El Misti Rises Above the Cathedral of Arequipa

Most tourists visiting South America tend to follow a well-beaten path to such destinations as Iguazu Falls and Machu Picchu. This is so pronounced in Peru that there is a roughly U-Shaped itinerary known as the Gringo Trail. It stretches from Lima south to Arequipa, occasionally taking in such stopovers as Paracas, Nazca, and the Oasis of Huacachina. Then, around Arequipa, there is Colca Canyon (twice as deep as our Grand Canyon), and the even more remote and even deeper canyon at Cotahuasi. From there, the tourist usually heads of Cusco, Machu Picchu, and Lake Titicaca. Backpackers frequently continue on to Copacabana and La Paz in Bolivia and on south.

In September, I myself will be hitting the Gringo Trail. The difference is that I will be avoiding two groups of people that constitute most of the tourists: backpackers and charter bus tour groups. I will probably encounter some of the same people several times, but I will likely not be traveling with them; and I won’t be staying in neither youth hostels nor five star hotels. I don’t mind the backpackers that much, but I dislike getting stuck in a party hostel in which the drinking and loud talk continue far into the wee hours of the morning. It will actually b quite a challenge to be taking the Gringo Trail while avoiding other travelers.

There are other sights in Peru beyond the Gringo Trail, but first I have to see to what extent I am affected by soroche, acut mountain sickness. It would be nice some day to visit Ancash, Huancayo, and Huancavelica. As for the Amazon areas, no thanks: I loathe mosquitoes.