One would never expect to run into the above four gentlemen in 2015 unless it were at a military re-enactment such as the annual one at Old Fort MacArthur Days in San Pedro, California.

There are several reasons why I am interested in attending this event:

What I do not like are the actual battle re-enactments, which are noisy, smelly, and not terribly realistic. But then I would not like to see real bodies littering the hillside. Instead, Martine and I like to circulate among the different groups and talk to the enactors at their encampments.

Martine, for instance, spent some time talking to the ladies from the Salvation Army, circa 1917-1918, as they offered donuts to the doughboys. I spent much of my time with the Clan MacColin (about which more in a future posting), the West Cork Flying Column (from the Irish Rebellion), and various Civil War groups.

One of the premier attractions at last week’s Old Fort MacArthur Days was my visit to the encampment of Clan Mac Colin. One of the reasons is that, although many of the performers cooked their own food, the Clan’s food looked the most scrumptious. When I asked some questions to the young lady in the photo above, she referred me to the clan’s Lore Master, who set me straight.

Clan Mac Colin attempts to reproduce a Scottish Highland (and Irish) way of life dating back to the Sixteenth Century, mostly centered around Glenderry, around East Loch Ewe, the Isle of Ewe, and the Gruinard Peninsula in what is now County Ross and Cromarty. I suspect some of the geography might be made up, but the way of life represented attempts to be as authentic as possible. If you are interested in delving into some of the details, you could hardly do better than scanning through the Basic Guide (which loads as an Adobe Acrobat PDF file). Also check out their Tribal Lore website, which is more succinct.

Although I have not an iota of Celtic blood in my veins, if I wanted to escape the cares of a stupid workaday life, I should think that Clan Mac Colin would exercise a powerful lure.

While going to Old Fort MacArthur Days is like walking through history, joining Clan Mac Colin is like living history. I would worship Saint Maolrubha with my fellow clan members. As the Tribal Lore site says, the good saint “continued the work of Saint Columba in Wester Ross and, retiring from that abby, established a cell on the isle of Maree in Loch Maree, the sight of his holy well. He is also the patron saint of the insane, being drug behind a boat around his island three times widdershins and drinking from this well is reputed to be a cure.” 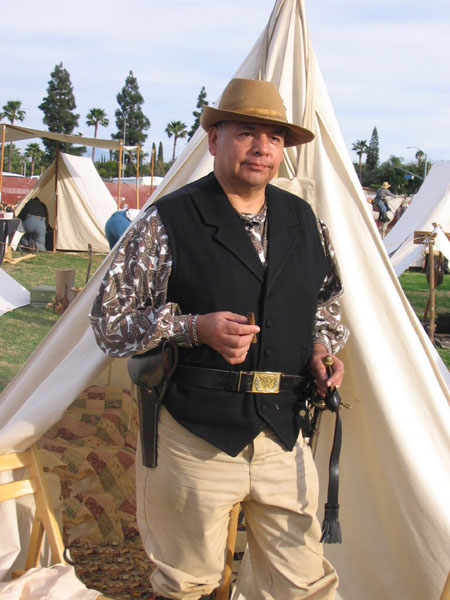 Everyone liked making fun of him, but he ran a tight ship at Old Fort MacArthur Days. Lou Lopez had been in charge of the event since 2000, and Martine and I were expecting to see him again yesterday behind the microphone trying to keep the straggling event together.

Only, we did not see him this time. Apparently, last month, he—such a lover of history—had himself passed into history on the morning of June 18.

I did not know him personally, and he certainly did not know Martine or me. He was one of those little guys that people joked about, but always with a feeling of affection and grudging respect.

It became evident yesterday at the parade of military units, always a feature at these events. It always began with the ancient Roman legions and ended with units from the Korean and Vietnamese conflicts. The public address system was haunted. It was used to conveying Lou Lopez’s voice over the air, but didn’t quite acknowledge his replacement.

In the meantime, Lou, in his traditional garb of the U.S. forces in Cuba, was off somewhere charging up San Juan Hill with Teddy Roosevelt.

The Nice Lady from the Legio X Fretensis

Martine and I love attending the large military re-enactment encampment at Old Fort MacArthur in San Pedro. Last year we missed it because I was still in Iceland, but today we spent the whole day at the Old Fort MacArthur Days event. It’s not that we were interested in the shooting events with all their noise and smoke: It’s just that it feels like walking through history.

The Legio X Fretensis (“of the sea strait”) actually existed. It was established by Augustus (then called Octavius) Caesar around 40 or 41 B.C. to fight during the Roman civil war. It lasted almost 500 years, fighting in the civil war that saw the end of the Roman Republic, plus two of the Roman-Jewish wars in Palestine. Some elements of it fought with Marcus Aurelius.

In San Pedro, the members we saw belong to a group that calls itself an “educational service organization” whose purpose is to instruct people about the Roman army, particularly in the First Century A.D. I enjoyed stopping by their tent for a few minutes to talk to the well-informed lady pictured above. As you may or may note know, I am a Roman history nut who has read all the works of Tacitus and many of his contemporaries. I am always delighted to find people who not only are well read in the subject, but can add to my knowledge.

During the next few days, you will see a few more postings about some of the things we saw during the re-enactment. By the way, Old Fort MacArthur is not named after General Douglas MacArthur, but after his father, General Arthur MacArthur, Jr., who was Governor-General of the Philippines after the Spanish American War. It seems to me his son also had some dealings with that particular archipelago….