If you have ever seen the movie Who Framed Roger Rabbit (1988), you’ve heard one theory why the best intraurban transportation system in America was destroyed. I think I can assure you that Judge Doom’s hatred of cartoon characters was not the reason why the Pacific Red Cars stopped running around the 1950s. If you’re looking for a reason, you could blame the construction of new freeways, the desire of General Motors to put every American behind the wheel of a Chevrolet, or the aging of the Pacific Electric rolling stock.

My late friend Bob Klein even wrote a novel in which the Red Cars figured—The Road to Mount Lowe—an enjoyable work (if you can get your hands on a copy of it). 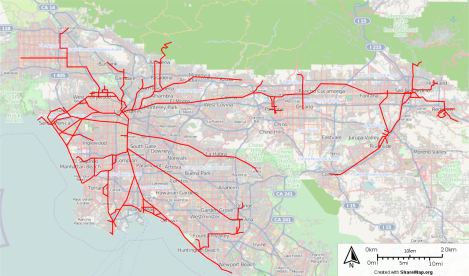 The Pacific Red Car Network at Its Height

For whatever reason, the Pacific Red Cars were replaced; and, L.A., which once had a world class public transportation system, wound up with bupkis. When I first came to Southern California, there were the buses of the Rapid Transit District (RTD), which were grossly inconvenient. For instance, going from West Los Angeles to Long Beach took upward of three hours or even more. Then the RTD gave way to the Metropolitan Transit Authority (MTA), and things slowly began to change for the better. First of all, the old Red Car right of way between downtown and Long Beach was rebuilt as the Blue Line. Two subway lines were built: the Red Line, connecting downtown to North Hollywood/Studio City, and the Purple Line, from downtown to Western Avenue. (The latter will eventually extend slightly west of the UCLA campus.) Then there was a Green Line connecting Norwalk to El Segundo. (Why didn’t they run from Norwalk to the airport? Politics?) Finally, the Expo Line now connects downtown L.A. to the beach at Santa Monica.

I am a regular rider of the Expo Line, allowing me to go downtown for thirty-five cents instead of paying twenty plus dollars for parking.

Although the present network is still nowhere as extensive as the original Red Cars, it’s nice to know that the public transportation scene in Southern California is no longer going into eclipse. 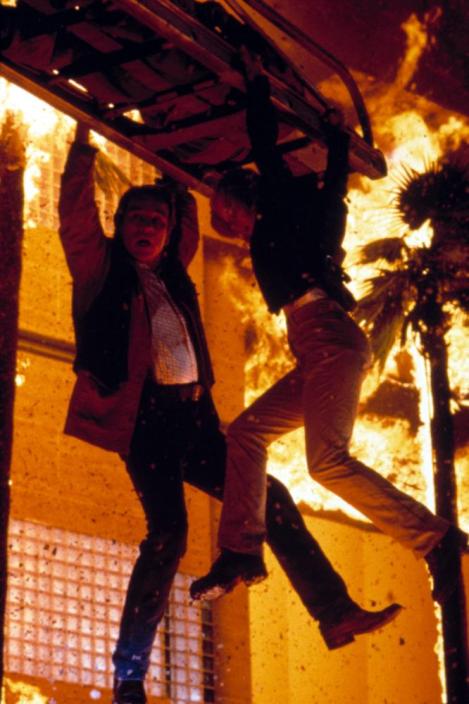 Still from Volcano (1997) with Tommy Lee Jones and Anne Heche

Although according to Mick Jackson’s Volcano (1997), the La Brea Tar Pits is home to a new volcano spewing lava all over the West Side, I see no evidence of that today. I don’t know how far fetched that movie is, but there is definitely something going on in the vicinity. Today’s Los Angeles Times contained an op-ed piece by David L. Ulin entitled “What Lies Beneath L.A.”:

For close to 20 years, my favorite landmark in Los Angeles was a pair of plastic sawhorses, each emblazoned with “City of Los Angeles Dept. of Public Works Street Services.” The sawhorses straddled a patch of pavement at the southwest corner of Wilshire and Curson, across from the La Brea Tar Pits, in front of the Craft & Folk Art Museum. They were there to warn pedestrians away from the small puddle of tar that continually seeped out of a seam in the sidewalk, a constant reminder of the instability of the ground on which this city is built.

Then the sawhorses disappeared. The seam had been repaved — a victory of human will over nature. But now, a year-and-a-half or so later, the sawhorses are back.

I don’t believe in victories of human will, especially in a landscape as elemental as Los Angeles’, which is, as we all know, riven by active faults, disfigured by tar seeps, reeking of gas leaks. In 1985, 23 people were injured when methane ignited and destroyed a Ross Dress for Less across from the Farmer’s Market, and just last year, another underground explosion blew open a manhole at this very intersection.

Today, Martine was in the area, visiting the Petersen Automotive Museum at Wilshire and Fairfax, a scant block or two from the Tar Pits. She was appalled by all the construction going on to extend the Purple Line from Wilshire and Western to (eventually) the Veterans Administration Hospital past Westwood.

One of the scariest scenes in Volcano was an MTA subway that meets up with a wall of lava. We are assured by the MTA that the tunneling they are doing in the area is completely safe:

Subway tunnels will be built through the use of closed-face, pressurized tunnel boring machines (TBMs). During construction, these pressure-face TBMs reduce gas exposure for workers and the public, while gassy soil and tar sands are treated and disposed of appropriately. Enhanced ventilation systems will be used where necessary to ensure tunnel and station safety and, if necessary, double gaskets for the tunnel lining or other measures may also be installed.

The funny thing about assurances is that they rarely inspire much confidence. Along that line, Ulin concludes his article with a wry observation: “Standing at the corner of Wilshire and Curson, waiting for the light to change, I take solace in knowing I am in the middle of a city where the tar simply won’t stop bubbling, no matter what we do.”