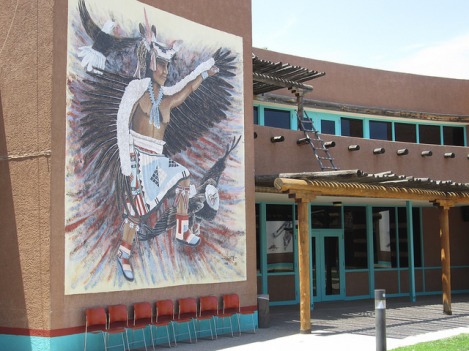 One of the very best places to visit in Albuquerque is the Indian Pueblo Cultural Center, just a mile or so north of Old Town. I have seen various Indian tribal centers before, but not one in which the overwhelming theme is not what separates them, but what unites them. It was founded and is run by the nineteen Pueblos of New Mexico, not all of which even speak the same language. In fact there are five separate languages among the Pueblos: Tiwa, Tewa, Keres, Towa, and Zuñi.

But then, this unity is what makes the nineteen Pueblos strong—ever since they joined to throw the Spanish out of New Mexico in 1680. Sure, they were reconquered twelve years later, but they continued to act as a tribal family. And when the United States took over the territory during the Mexican War of 1846-1848, they settled down and managed to avoid the suffering felt by the more nomadic Navajo and Apaches. There were no Pueblo leaders who were forced to live in swamps of Florida: They pretty much remained in place for the next three hundred years or so.

Fortunately, the Americans were not quite so insistent about converting the Pueblos. As Dr. Joe S. Sando of Jemez Plueblo wrote:

The Spanish pressured the Pueblo People to limit our ceremonial dances and participation in religious activities. Instead we were forced to attend the Spanish house of worship. How could we relinquish a religion which was not a weekly exercise? Our belief system was interwoven into every part of our daily lives. It was this religion that helped to maintain our peaceful attitudes and balance in our daily lives.

Even so, the 19th century Americans had Pueblo and other Native children to be sent to distant boarding schools back East, where an attempt was made to, in effect, de-racinate them.

The overall impact of the Indian Pueblo Cultural Center is a positive one. There are even dances at certain times, and there is an excellent restaurant called the Pueblo Harvest Café which is one of the best places to eat in the whole city. 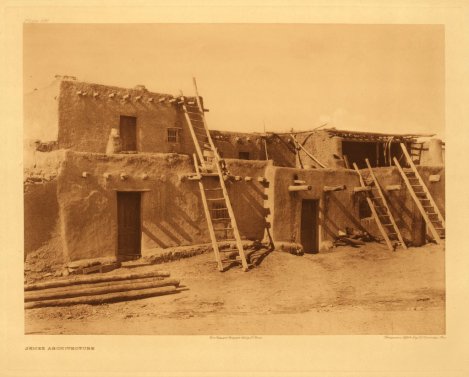 The Indians we know most about are the ones that appeared in the old Westerns: The Navajo, Apaches, Comanches, and Sioux. There are some twenty Indian tribes in New Mexico and Arizona that, insofar as I know, never appeared in any. John Wayne never fought them, nor did Randolph Scott or Jimmy Stewart or Audie Murphy. I am referring to the Pueblo Indians, most of which are located around Albuquerque and Santa Fe, New Mexico.

We know that the Navajo, Apaches, Comanches, and Sioux have been warlike. But did you know that the only successful Indian revolt against Western colonization was fought by an alliance of Pueblos in 1680. It was not until twelve years later that the Spanish reconquered the territory, but even then with difficulty. Many of the most warlike Pueblos simply united with the Hopis and Navajos.

I have just finished reading The Pueblo Revolt: The Secret Rebellion That Drove the Spaniards Out of the Southwest by David Roberts (New York: Simon & Schuster, 2004). The key word in the title is “secret.” To this day, the Pueblos do not choose to discuss the conflict—even one that occurred over four centuries ago. Consequently, most people do not know about it.

Why the secrecy? I think it is a cultural trait. Years ago, Martine and I spent the night on the Zuñi Reservation at a time when most of the town and surrounding areas were off limits to non-Zuñis because some tourist had misbehaved at a ceremonial in the distant past. One cannot just waltz into a Puebloan reservation and have the run of the place. You will be referred to the tribal authorities, who most likely will ignore your request as a matter of course. It’s not that they are unfriendly: For them survival involves buttoning their lips, even if it involves a 450-year-old secret that just happens to be none of your beeswax.