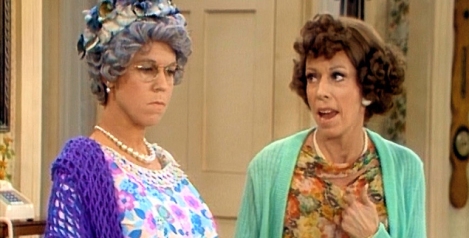 As you have heard me say on a number of occasions, I do not watch television—but I used to. That was back when the audience was less fragmented and less monopolized by navel-gazing “indies.” And, as the siege of furnace-level heat continues in Southern California, Martine and I decided to pay a visit to the Paley Center for Media in Beverly Hills.

The last time we were there, about four or five years ago, it was call the Museum of Television and Radio. A lot has changed since then. For one thing, it is much easier to use the library. Instead of just calling for videotapes to be mounted by some operator in the basement, some 40% of the content is now digitized and can be accessed by an interface similar to YouTube.

While Martine sat at one console watching the old Lassie show, I was watching 1970s comedy in the form of the Carol Burnett Show and Saturday Night Live. From the same console, it is also possible to call up old radio programs.

We enjoyed our visit so much that I signed Martine and I up as members, which gives us additional privileges.

If you perchance find yourself in Beverly Hills, the Paley Center is worth a visit—particularly if you enjoy old television and radio. An extra bonus: It’s located on the same 400-block of North Beverly Drive as Nate ’n Al’s, a Jewish deli that is as old as I am (Pleistocene Era) that has managed to maintain a high level of quality.