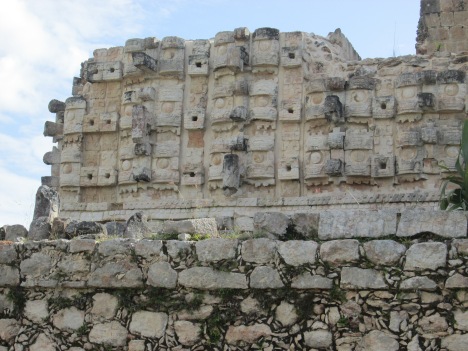 The Codz Pop at Kabah

Back in June, I had a very exaggerated picture of the ruins I would be visiting. Because I wanted to see everything, I imagined that it was feasible to criss-cross four Mexican states to see Maya sites that were hundreds of miles apart. Although theoretically it was possible, I quickly realized that there were too many long bus rides and tours that required more than several participants (or else pay a steep price for guides and transportation for a single paying customer). Here is what I wrote in June:

I have been to Yucatán four times in all, the last time with Martine in November 1992. During my visits between 1975 and 1992, I have visited about a dozen Maya archeological sights. Since then, scores more have been developed, including one of the largest at Calakmul in the State of Campeche. In addition, I hope to visit Cobá in Quintana Roo, Ek Balam and Kinich Kakmó in Yucatán, Edzna and several Rio Bec sites to be decided later in Campeche, and Yaxchilan and Bonampak in Chiapas. In addition, I plan to revisit some of the sites I have already seen such as Chichen Itza, Uxmal, and Palenque.

In the end, these were the ruins I visited (the ones I saw for the first time are marked with an asterisk):

The Korbel Arch at Kabah

Because I never made it to Chiapas, that meant that Palenque, Bonampak, and Chiapas were out of the question. Calakmul and the Rio Bec sites in the State of Campeche were too expensive for a single-person tour, and ditto for Cobá in Quintana Roo. I did not originally plan on seeing Dzibilchaltún again, which was the first Mayan ruins I visited in 1975, but I had some time on my hands in Progreso, so I hired a taxi to take me there.

In the end, if I had seen everything I originally planned for, I would have been gilding the lily. As it was, I was delighted with what I did see—and I have a motivation for returning to the Yucatán Peninsula for more.

Lately, I have seen a number of paintings by Filip Hodas, a self-proclaimed 3-D artist from the Czech Republic. The illustrations shown here can be described under the heading of the Apocalypse of Pop Culture. Not all his work is on this theme, but the images that startled me definitely were. (You can see more of his work by clicking here.)

It is somewhat appropriate that the images of much-loved pop icons in the process of falling into disrepair and ruin comes from a resident of Prague. The Czechs, like the Hungarians and other Eastern Europeans were essentially trashed under the postwar Russian occupation. So now, as the West begins its own decline, why should our icons escape the wrecking ball of history?

I particularly love the McDonald’s Happy Meal box, turned into a kind of rural slum dwelling. One can almost expect to see an American Hansel and Gretel wending their way to this sagging ruin.

Allow me to leave you with one final Hodas image, that of a wrecked and graffiti-covered Pac Man: 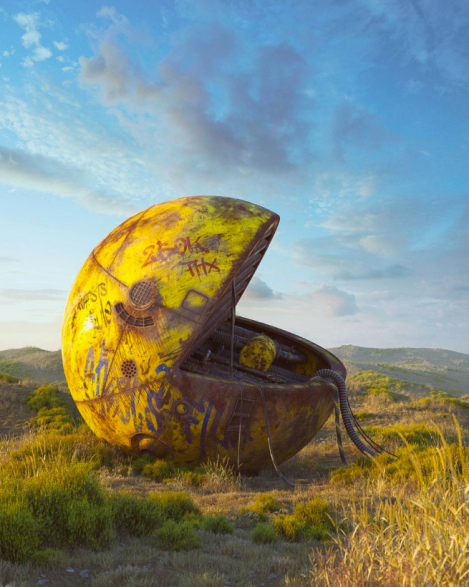 A Poem from My Latest (Re-)Discovery

On August 4, I wrote a Serendipity posting entitled In Praise of the Short Biography. It was around then that I began reading F. L. Lucas’s In Search of Good Sense: Four Eighteenth Century Characters—Johnson, Chesterfield, Boswell, and Goldsmith. I have now finished the book and fallen quite in love with it. Lucas is the ultimate classicist: There is not even the slightest whiff of the postmodern about him.

I actually find that quite refreshing. Lucas died in 1967. In the early 1960s, he was a name to be reckoned with. I read and loved his book Style while I was in High School, and it had (I hope) a beneficial influence on my own writing style.

Having rediscovered him by sheer chance (scanning the literature stacks of L.A.’s Central Library), I want to read some more of his work in he next year. Below is his most famous poem, entitled “Beleaguered Cities” (1929):

Build, build your Babels black against the sky—
But mark yon small green blade, your stones between,
The single spy
Of that uncounted host you have outcast;
For with their tiny pennons waving green
They shall storm your streets at last.

Build, build the ramparts of your giant town;
Yet they shall crumble to the dust before
The battering thistle-down.

As one who has spent many years visiting Mayan and other ruins, I find Lucas’s poetic vision to be profound. He is, after all, a scholar of Classical Greece and Rome who is familiar with many of the ancient sites.