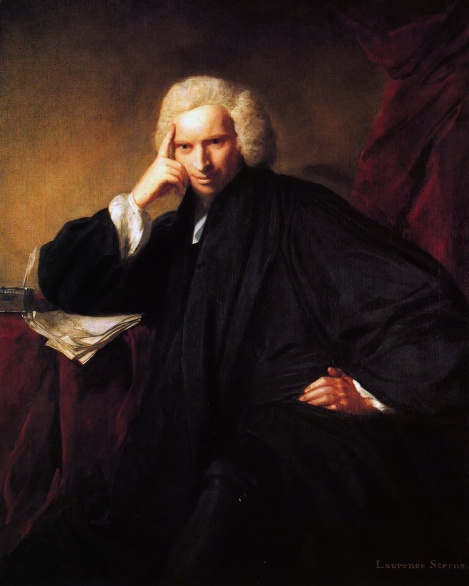 He was a Yorkshire Anglican clergyman who just happened to write one of the five greatest novels ever written, Laurence Sterne (1713-1768) gave us The Life and Opinions of Tristram Shandy, Gentlemen (1759-1761), a book that can be read and re-read with pleasure over an entire lifetime. It was in the mid 1960s that I first encountered it in Chauncey C. Loomis’s class on “The Eighteenth Century English Novel.” Loomis was my favorite professor of English, which happened to be my major at Dartmouth. I am still re-living that class and re-reading the books that he assigned. That makes his class one of the best I ever took.

Tristram Shandy revolves around four plot points that would seem to be pretty thin. All the plot points involve either interruptions or “abridgments” of various sorts:

How these four main plot points are stretched out over some five hundred pages of warmth and hilarity is a major miracle. The plot is positively Ptolemaic, with little epicycles and interruptions that create hilarious interludes.

It has always amazed me that it is the young Tristram Shandy who is narrating the novel. Yet he is not born until midway through the book, after we have been exposed to numerous incidents which the young Shandy could not have experienced as he was still in utero.

I can see myself coming back to Tristram Shandy again and again, paging at random to the beginning of a sequence, and reveling in it again … and again. 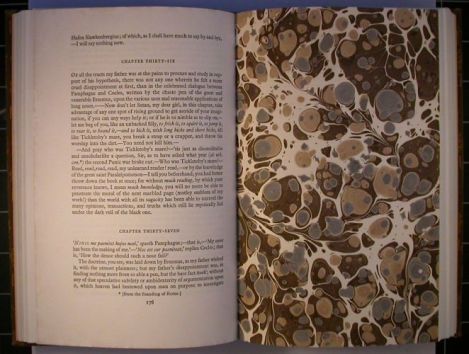 The Notorious Marbled Page in the Middle of Tristram Shandy

One of the oddest novels ever published is Laurence Sterne’s The Life and Opinions of Tristram Shandy, Gentleman (1759-1761). I first encountered it in college in a class on the 18th Century English Novel. I fell in love with its eccentric charms when I was scarce nineteen years old. Upon re-reading it, I love it all the more. The novel seems to start several times in its nine books, and there is a marbled page (see above) several hundred pages in. I have a whole lot more to say about this book in a future post. Below is the first paragraph of the book:

I wish either my father or my mother, or indeed both of them, as they were in duty both equally bound to it, had minded what they were about when they begot me; had they duly consider’d how much depended upon what they were then doing;—that not only the production of a rational Being was concerned in it, but that possibly the happy formation and temperature of his body, perhaps his genius and the very cast of his mind;—and, for aught they knew to the contrary, even the fortunes of his whole house might take their turn from the humours and dispositions which were then uppermost;—Had they duly weighed and considered all this, and proceeded accordingly,—I am verily persuaded I should have made a quite different figure in the world, from that in which the reader is likely to see me.—Believe me, good folks, this is not so inconsiderable a thing as many of you may think it;—you have all, I dare say, heard of the animal spirits, as how they are transfused from father to son, &c. &c.—and a great deal to that purpose:—Well, you may take my word, that nine parts in ten of a man’s sense or his nonsense, his successes and miscarriages in this world depend upon their motions and activity, and the different tracks and trains you put them into, so that when they are once set a-going, whether right or wrong, ’tis not a half-penny matter,—away they go cluttering like hey-go mad; and by treading the same steps over and over again, they presently make a road of it, as plain and as smooth as a garden-walk, which, when they are once used to, the Devil himself sometimes shall not be able to drive them off it.