The Dash B Bus to Chinatown

Today, as usual, I took the Expo Line train to downtown L.A. (or DTLA), as it is being called colloquially. It was a strange ride: During the last half hour of the trip, a black passenger was loudly swearing at and berating the woman he was with, and cursing at everything and everyone else along the way. The other passengers just became ever more absorbed in their reading or their smart phones. They did not want to draw any irate loony-bird attention to themselves.

When we pulled into the 7th Street Metro terminal, I made a beeline for the Central Library. I returned all the books I had checked out and took the elevator to the third floor Literature and Fiction section, where I spent a couple hours reading James Ellroy’s Blood on the Moon, the first volume of an early trilogy featuring Detective Sergeant Lloyd Hopkins of LAPD Homicide.

Just before 12:30, I made my way to Conference Room A for my weekly Mindful Meditation class, taught by Giselle Jones of the Mindful Awareness Research Center at UCLA. I have become dependent on these weekly sessions to help keep my feet on the ground. Also, they give me a feeling of tranquillity which lasts for hours.

After the session, I grabbed the Dash B bus to 1st Street, where I was planning to transfer to the Dash A bus to Little Tokyo. Opposite me on the sideways bench seating was a slim young barefoot black woman who was stunningly beautiful. She seemed to be looking straight at me and talking, but I never could understand what she was trying to say; and she got off after a couple of stops.

In Little Tokyo, I made my way to Weller Court, where there were a number of Japanese restaurants. I had a bowl of spicy chashu ramen at the Hot Pot Galaxy and walked over to the Kinokuniya Bookstore, where I bought a book by the Dalai Lama.

From Little Tokyo, I made my way to the Santa Monica Rapid 10 bus stop opposite Union Station and waited the usual maximum time for the next bus to appear. I was dropped off at Bundy and Idaho, from where I walked back to my apartment. 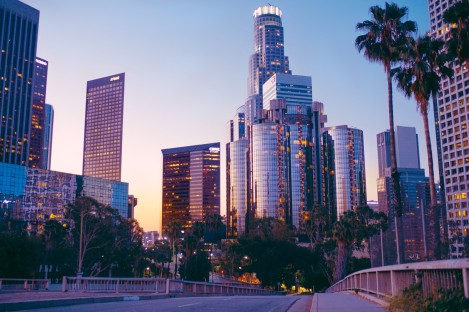 Don’t let anyone tell you he or she knows Los Angeles. Why? Because there’s too much for one person to know. There are broad swaths of the county which I have never seen, mostly to the Southwest, all those weird little communities along Interstate 5 like Hawaiian Gardens, Downey, Lynwood, Paramount, Bell Gardens, and Santa Fe Springs.

But thanks to today’s little safari, Martine and I know a little more about the area immediately to the Northeast of Pershing Square. We had three destinations and hit them all:

The big surprise was Union Station, where I arrived in Los Angeles on December 28, 1966, on the Santa Fe Railroad’s El Capitan train service. For decades, the station fell into disrepair and disuse as Amtrak hit the skids. But then the city decided to add a substantial suburban rail system called Metrolink, a growing network of subways and light rail lines, and a bus hub. Now its a busy place with new shops opening and crowds of people on the way to and from somewhere.

Tomorrow, the Expo Line will link Santa Monica to downtown L.A. with the nearest stop being a few blocks south of me at Bundy just south of Olympic.

It’s nice to know that, in this day and age, I can find something positive to write about without having to grit my teeth.