I am rather new to Get Carter, which I saw for the first time last year. It is a tale of revenge by a London mobster on the Newcastle hoods who killed his brother and cast his teenage niece in a pornographic film. Once Caine has seen the film, he goes on a killing spree of unabated fury and brutality against the Newcastle mob. There was a remake shot in 2000, but the Michael Caine film directed by Mike Hodges is the version to see.

Interestingly, the role of Newcastle mob boss, Cyril Kinnear, is acted by playwright John Osborne of Angry Young Men fame (Look Back in Anger, The Entertainer, the screenplay for Tom Jones).

This is a fairly violent picture, but it is well made and definitely worth seeing. 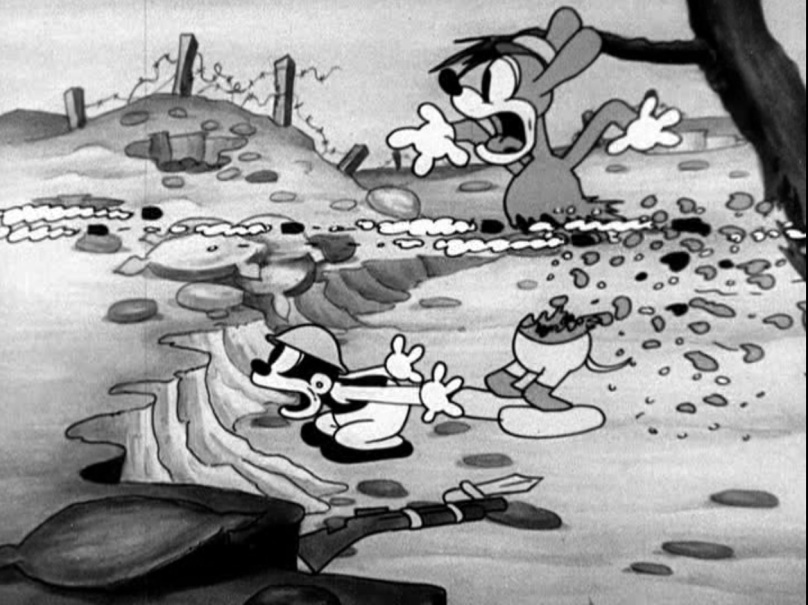 Bosko the Doughboy (1931): Violence and Absurdity

Before the Hays Code was widely adopted around 1934, Hollywood produced a number of wild films that would be frowned upon even in today’s Quentin Tarantino environment. One of the wildest is a Bosko cartoon released by Warner Brothers in 1931 which shows the horrors of World War I in a graphic and yet insanely cheerful manner. Oddly, it was directed by Hugh Harman, whose Harman-Ising cartoon productions usually showed cute animals innocently singing and cavorting on farms and in the wilds.

In “Bosko the Doughboy,” one of the first shots is a brutal machine-gunner who turns his weapon to the camera and shoots the audience. 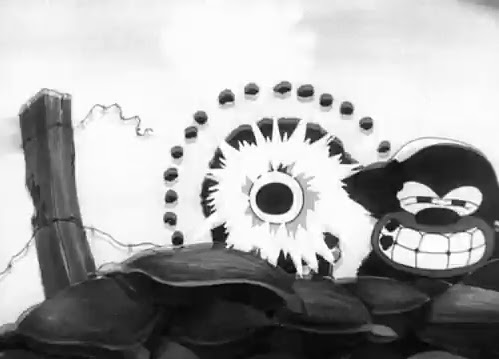 I have seen numerous World War I films such as Stanley Kubrick’s Paths of Glory (1957) and the recent They Shall Not Grow Old (2018). Yet neither of these films can hold a candle to “Bosko the Doughboy,” whose experiences would shame the Good Soldier Schweik or Bertolt Brecht or Eugene Ionesco. This is a cartoon which remains on a manic and chirrupy plane even when many of its cute animal characters are shot to pieces by machine guns, cannon, or aerial bombardment. Nobody is sad, even when in articulo mortis.

You have to see this film to believe it. It’s only seven minutes long.

In the very last scene, a bomb explodes right by Bosko, turning him black. His response? He spreads his arms wide and shouts “Mammy!” a la Al Jolson.

There’s a Reason for Ferguson and Baltimore

Violence is woven into the warp and woof of American life. When we are young, it takes over our dreams and make us imagine a super self that can take revenge on the bullies that steal our lunch money and slam us into the hallway lockers. Even when we grow up and become strong, we want to have an edge over all the people we imagine could harm us. Perhaps these people are Black or Mexicans; they’re not our kind of people. Hence, they represent a threat to us.

Perhaps we don’t get into our superhero uniform and cosplay our way out of trouble. Instead, we get guns and use them when we are threatened. We go in for such nonsense as “open carry” and claim that we, in the spirit of the Second Amendment, constitute a militia. But we really don’t. Instead, perhaps our wives yell at us or make eyes at Ralph next door. We pull out our guns and blast away. Or Junior gets upset that Little Bobby stole his tricycle. He knows where Daddy keeps his loaded gun. He find it, and before you know it he’s on the evening news.

Notice that our superheroes are not interested in getting along with people, in negotiating calmly with them. It’s either blood, or you’re a wuss. We make fun of Europeans for being more civilized than us, but down which mean street would you prefer to walk? Laugavegur in Iceland’s Reykjavik? or Hough Avenue in Cleveland?

In his novel The Adventures of Kavalier and Clay, Michael Chabon depicted the cartoonists who created America’s superheroes as transferring the Jewish Ghetto hero that was the Golem to American streets. The problem is, things got out of hand. The translation went awry.

I’m not saying the superheroes are to blame: It’s just that they represent one of the elements in American life that symbolize the mess that we’re in.

Once again, I am inspired by one of Jóhannes Benediktsson’s “Daily Life” columns on the Iceland Review website. This one appeared on March 7 of this year, while I was involved in a typical tax season imbroglio not unlike the one illustrated above.

The subject of Jóhannes’s column was based on a meditation about the inevitability of death:

I’ve come to the conclusion, that I must somehow cheat death. Like artists do. They live on through their art. And the same goes for politicians. They will always be remembered in history books.

But there is another way to become immortal, I’ve discovered. And it is so much easier.

The trick is, according to the Icelandic Sagas, to say something incredibly witty, right before you die. It doesn’t matter who you are.

Following are some (well, actually most) of the highlights from his column. First up is a messenger sent by some assassins to see whether Gunnar of Hlidarendi was home:

“You’ll have to find that out for yourself. I do know his halberd was home.”

The name of the assassin, according to Njals Saga (the greatest of all the Icelandic sagas), was Þorgrímur Austmaður, and it is his only appearance in the saga. After his famous line, he collapsed in his own blood. Shown below is a halberd: 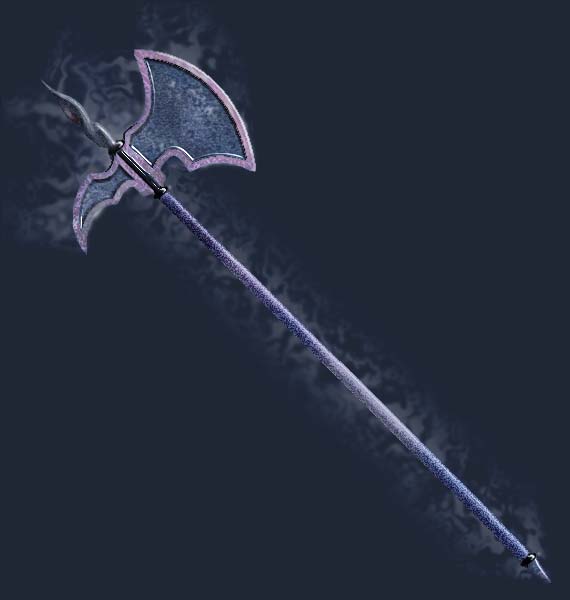 When gutted by a spear in the Gisla Saga (a.k.a. Gisli Sursson’s Saga), Véstein Vésteinsson cried out, “Bullseye!” (Mighty sporting of him, that!)

Then, in my second favorite saga, Grettir’s Saga, Átli Asmundarson cries out when hit by a broad spear: “Ah! It seems that broad spears have become fashionable.”

Finally, there is poor Þormóður Kolbrúnarskáld in The Saga of the Confederates who is all but disemboweled. Looking at his guts lying on the ground, he exclaims, “The king has fed us well!”

Now there are many reasons to love the sagas, and there is far more than gory violence and unbelievable sangfroid to be encountered in them (though it is by no means absent). I have read all the sagas from which Jóhannes quotes, most of them more than once, and keep finding myself sucked in by a frontier society that strives to arrive at some sort of balance in the absence of a king or any effective hierarchical government.

All the early Icelanders had to rely on was themselves, with the occasional help of some of the more prosperous families who offered their services as intermediaries in the disputes that inevitably arose.

In many ways, it was very much like our own Wild West.

Evil Lurks in the Suburbs of America

The motto comes from Walt Kelly’s late cartoon strip: “We have met the enemy and he is us.”

Here I am, a white male, a member of a demographic segment that is causing incredible violence across the United States. We would much rather persecute gays, Muslims, African-Americans, Hispanics—but what about us? Adam Lanza, the Newport shooter, was one of us. Is it time to start profiling white males?

After the Second World War, while the people of Europe and Asia were picking up the pieces of their lives, we went through an unprecedented period of prosperity. We moved from the cities to the suburbs, thinking we could leave all our problems behind us. But that is not what happened: We took the problems with us, in the form of our children.

There we lived in our self-contained ranch houses on cul-de-sacs across the country, hiding the fact that inside our cute little homes were millions of dysfunctional families. When mental health care began to blink into non-existence in the 1980s, we hid our shame as much as we could. That, however, did not work. You can’t suppress the horror. It will out. It did out last Friday in a Connecticut suburb.

That Says It All

What to do about it? We can begin the long, slow road toward gun control. That wouldn’t have helped at Sandy Hook Elementary School because the weapons were legally obtained, and then stolen from the shooter’s mother, herself a victim. We could talk about better mental health care, but mental health in this country is at a strange crossroads, where we are repudiating many old methods and increasingly relying on anti-depressant medications to do all the heavy lifting.

Perhaps we just have to admit our vulnerability. The craziest people in America today are white males. And you are reading this blog post by a white male. Don’t worry about me, however, I not only don’t have any guns; but I never want to own any firearms. I’m all right, but watch out for all the other white males. Some crazy shit out there!