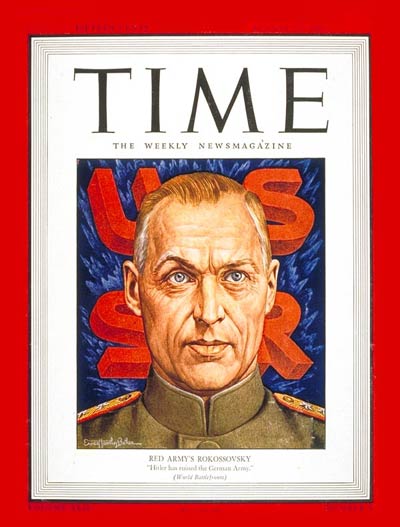 Stalin was one of the great paranoids of history. Beginning in 1937, he purged a large percentage of the top officers in his military—just before Hitler invaded Russia and caught the army and Stalin flat-footed. Gone were three of the five marshals of the Red Army, including Mikhail Tukhachevsky (a brilliant strategist who has influenced warfare to this day), Vasily Blyukher, and Aleksandr Yegorov; thirteen out of the fifteen army commanders; eight out of nine of the admirals; fifty of fifty-seven army corps commanders; 154 out of 186 division commanders, 16 of 16 army commissars; and 25 of 28 army corps commissars.

Did he not think he would be needing his military commanders to fight off the coming Nazi onslaught? It’s hard to tell, but when Operation Barbarossa kicked off in 1941, the Russians had 3.3 million men under arms, 2.1 million of whom were dead or missing in the third quarter of 1941 alone!

Somehow Stalin had to find generals to replace those whom he had shot or imprisoned. In fact, he had to release about 30% of the purged generals and admirals who were festering in various of his Gulags.

One of them was General Konstantin Rokossovsky, who was half-Polish and half-Russian. Under interrogation by Stalin’s NKVD (the predecessor of the KGB), the General had eight was his teeth knocked out (which is why you don’t find too many pictures of him smiling). Yet, Rokossovsky was the go-to guy for such operations as the victory at Stalingrad, where he all but wiped out a whole German army. For this, he was promoted to Field Marshal and, later, promoted to command one of the three Russian armies converging on Berlin.

After the war, he was made one of the leaders of the Polish Peoples’ Republic and returned to Russia to serve in several key defense posts under Khrushchev. He died in 1968 at the age of seventy-one and is buried in Red Square.

Apparently, once he returned to active service after being tortured and accused of false crimes—mostly for being an adherent of the brilliant Marshal Tukhachevsky—there was no longer any question of his loyalty, which he proved time and time again by clipping the wings of the Nazi war machine.

Here in the United States, we don’t know much about the men who had more to do with Hitler’s defeat than anyone on the Western Allies’ side, including Eisenhower, Patton, Bradley, and Montgomery. Rokossovsky was just one of those immortal heroes, along with others such as Zhukov, Konev, Vasilevsky, Cherniakhovsky, and other men whose names we can’t pronounce but who helped change the course of history.

The Time magazine cover shown above was for the issue of August 23, 1943.