I remember my first vacation on my own. Despite protests from my parents, who, of course, wanted me to come to Cleveland and slip into the family ways like putting on a glove. But I was thirty years old, and I wanted to travel.

As a child, my travels were limited to places my parents wanted to go, places like Detroit; Lake Worth, Florida; Niagara Falls; and Passaic, New Jersey. My only choice as a child was a day trip to Schoenbrunn Village in Central Ohio, site of the first settlement in the state. (And the folks did not enjoy it, although my brother and I did.)

So, in November 1975, I decided to spend eighteen days in Yucatán visiting ancient Mayan ruins. It was a great trip, and it turned me around completely. No longer was I going to be satisfied by hanging out in Cleveland, a city from which all my friends had fled after high school.

Above is a mural on Rivadavia, a north/south street in the Tierra Del Fuego capital of Ushuaia. It also happens to be the street where I slipped on the ice in 2006 and cracked my right humerus, just one block north. No matter: Five years later I returned with Martine, stayed at the same bed & breakfast (the Posada del Fin del Mundo), and had a wonderful time. 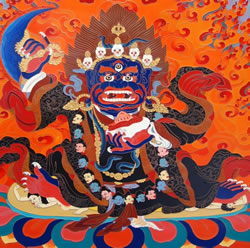 According to the Tibetan Book of the Dead, if you are frightened of the demons, your soul will gravitate toward a copulating couple; and you will be reborn as their child. If you are not moved by fear, there is a chance that you will obtain Nirvana.

That’s why I would have no fear about traveling to Turkey, to Russia along the Trans-Siberian Railway, and any number of places. Of course, I have no intention of visiting Syria, North Korea, Somalia, or Mali. That would not be prudent.