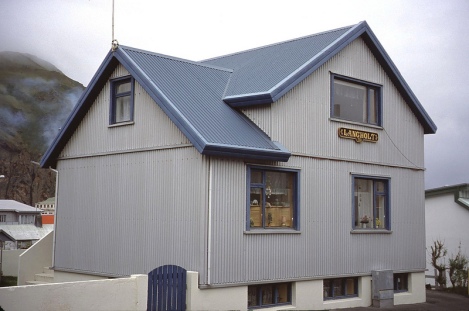 In a Land of Fierce Winds, Corrugated Steel Siding is Required

How windy is it in Iceland? For one thing, there are no tall trees on the island. The joke among the natives is the answer to the riddle, “What do you do if you’re lost in an Icelandic forest?” The answer: “Stand up!”

More of the land used to be forested, but centuries of sheep herding and gathering wood for charcoal and building had depleted the original forests. In the medieval sagas, most of which were written in the thirteenth century, much is made of who has the legal rights to claim driftwood that has washed up on the beach. (Cf. The Saga of Havard of Isafjord.)

One of the things I found most curious when I landed in Reykjavík were all the houses with painted corrugated steel siding. The above house is in Heimaey on the Westman Islands, but the general principle holds: Protect it with steel or the wind will blow your house in, if not away. The same goes for the roofs: A shingle roof would not last a month.

The painted corrugated siding does add quite a bit of color to a land which would otherwise tend toward the grey and gloomy. The following is a photo of the Bautinn, my favorite restaurant in Akureyri: 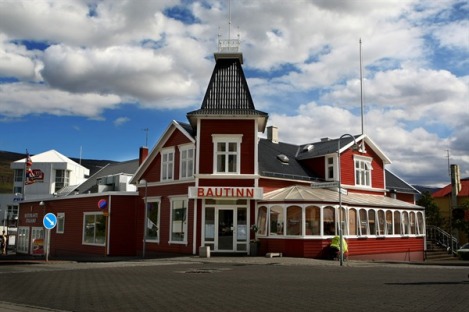 The Colorful Bautinn Restaurant in Akureyri

Whole neighborhoods in Reykjavík and other cities feature buildings whose siding has been painted in bright colors.