Home » vacation » What I Will Remember Most 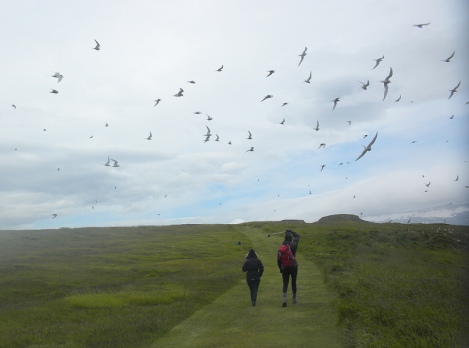 Under Attack by Arctic Terns

Now that I’ve been back from Iceland for six weeks now, what do I remember most about that remote and somewhat wild island? The place that keeps coming back to me are the West Fjords. Only some seven thousand people live on a large peninsula punctuated by basaltic ridges and broad fjords. It is quite possibly one of the most isolated parts of Europe, even though one can reach it from Reykjavík by bus in about eight hours.

Above is our little guide Thelma (which she pronounces as Talma) walking with a tourist surrounded by an angry cloud of arctic terns who are aggressively defending their nearby nests. I can understand them, in a way. It’s been a bad year for Icelandic birds, what with the puffins of Vestmannæyjar being unable to produce a bumper crop of little pufflings, and arctic terns likewise having problems due to global warming. 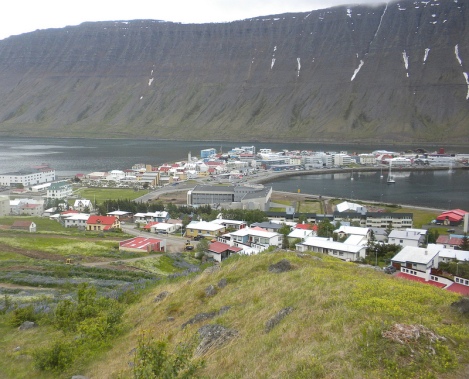 The Little Town of Isafjörður

Not that I felt particularly warm in the West Fjords “capital” of Isafjörður” (shown above) which has only some two thousand inhabitants. It’s on a little sandy spit of one of Iceland’s largest fjords, and it is fully about ten degrees Fahrenheit colder than any other part of Iceland that I visited, with the exception of the glacier Vatnajökull.

Why does the image of the West Fjords stick with me so much? And not only with me, but with other travelers as well. Most of them go to backpacking to Hornstandir, a desolate peninsula with spectacular views jutting out into the Denmark Straits that separate Iceland from Greenland. I myself did not go there, but most of the European kids who stayed at the youth hostel made that their number one destination. I’d like to see it some time, but I doubt I am up for a multi-day trek with tent, sleeping bag, camp stove, and food.

No, I will remember the long bus rides on gravel roads past spectacular waterfalls and cute little villages like Thingeyri and Patreksfjörður. I will remember the bird cliffs at Latrabjarg, where a gale-force wind was trying to blow me to my death on the rocks several hundred feet below. I will remember the island of Vigur (top photo), where a single family ekes out a living gathering eider down and welcoming summer tourists with coffee, tea, and homemade cakes.

These places are all etched in my memory. The beauty will remain with me forever.

3 thoughts on “What I Will Remember Most”