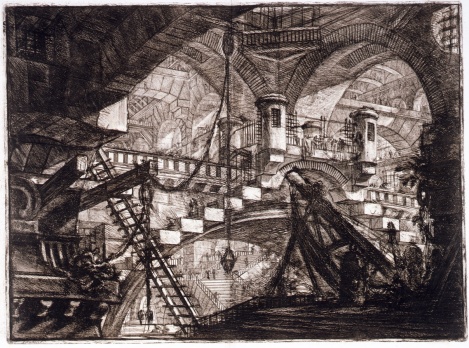 Why Do I Think of Prisons During Tax Season?

When I first came to Los Angeles, UCLA had a special program of renting prints and etchings to members of the university community at a low price. I fell in love with a print by Giambattista Piranesi (1720-1778), a Venetian artist known for his series of prints on prisons, or Carceri. I seem to remember having, for about six months, the above print, one of a series of sixteen he did that were to bridge the classical period with the romanticism and surrealism that were to follow.

In his Confessions of an English Opium Eater (1820), Thomas De Quincey wrote:

Many years ago, when I was looking over Piranesi’s Antiquities of Rome, Mr. Coleridge, who was standing by, described to me a set of plates by that artist … which record the scenery of his own visions during the delirium of a fever: some of them (I describe only from memory of Mr. Coleridge’s account) representing vast Gothic halls, on the floor of which stood all sorts of engines and machinery, wheels, cables, pulleys, levers, catapults, etc., etc., expressive of enormous power put forth, and resistance overcome. Creeping along the sides of the walls, you perceived a staircase; and upon it, groping his way upwards, was Piranesi himself: follow the stairs a little further, and you perceive it come to a sudden abrupt termination, without any balustrade, and allowing no step onwards to him.

I still love looking at Piranesi’s imaginative prisons, and I think of myself trapped in one of them—at least until April 15 or thereabouts. Tomorrow is the first of eight Saturdays I will have to work. Oh, well, here are only a little more than fifty days left of this dreadful time. I will probably survive, diminished only slightly.