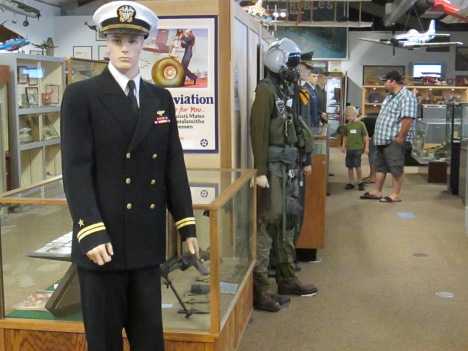 At the Estrella Warbirds Museum in Paso Robles

At various points across the United States, there are little flying museums usually tended to by retired military aviators and their families. One such is the Estrella Warbirds Museum in Paso Robles, which is located along the south edge of the local general aviation airport. In addition to the old fighter jets and prop planes, helicopters, jeeps, and ammo, there is adjoining all the weaponry a car exhibit called the Woodland Auto Display.

After leaving my brother and sister-in-law in Paso, Martine and I headed east on Route 46, stopping first for a couple of hours to see the displays. We weren’t able to give much time to the exhibits parked outside, largely because the temperature was 106° Fahrenheit (or 41° Celsius). Martine loves to visit these old military museums (including the one at Palm Springs, by the Santa Monica Airport, and the Torrance airport). It’s sad to think that the vets who flew these aircraft are beginning their own inexorable journey toward the setting sun. Very likely many of these museums won’t be around in a few years.

Considering the news from Iraq, the bomb photographed below might well become more topical: 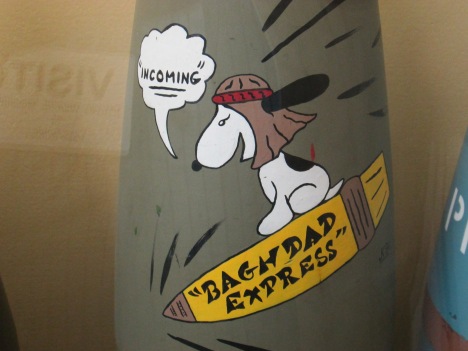 Leftover Bomb from 2003 Invasion of Iraq

After our visit to see the warbirds, Martine and I headed further east on 46 and 41 until we joined Interstate 5 around Kettleman City. Our destination for the night was the Harris Ranch Inn at Coalinga, where we spent the night in air conditioned comfort and gorged ourselves on prime beef.
34.052234 -118.243685