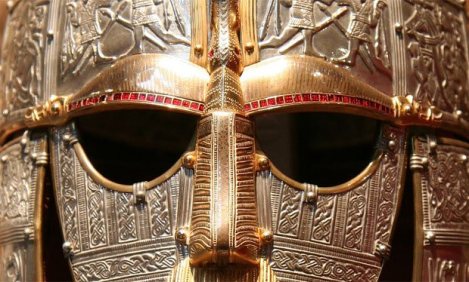 I am continuing to undergo a period of interest in the Anglo-Saxons. It started with some old poetry, and now I am reading the latest in Bernard Cornwell’s excellent series various called Warrior Chronicles and Saxon Tales. Set in the Tenth Century, we see the half-pagan, half-Christian Uhtred of Bebbanburg and his son of the same name battling internal enemies in the Mercian kingdom as well as Viking raiders.

Warfare among the Anglo-Saxons was a bloody affair. The warriors on each side linked their shields together and proceeded to hack above and below them with swords and axes to bring down their foe. In The Empty Throne, we find the senior Uhtred laid up with battle scars, but pretending to be hurt more than he is.

Reading this description of shield wall battle from Cornwell’s earlier The Pagan Lord, one wonders that he is alive at all:

There is a way of battle. In the end the shield walls must meet and the slaughter will begin and one side will prevail and the other will be beaten down in a welter of butchery, but before the blades clash and before the shields crash, men must summon the nerve to make the charge. The two sides stare at each other, they taunt and insult each other. The young fools of each army will prance ahead of the wall and challenge their enemy to single combat, they will boast of the widows they plan to make and of the orphans who will weep for their fathers’ deaths. And the young fools fight and half of them will die, and the other half strut their bloody victory, but there is still no true victory because the shield walls have not met. And still the waiting goes on. Some men vomit with fear, others sing, some pray, but then at last one side will advance. It is usually a slow advance. Men crouch behind their shields, knowing that spears, axes and arrows will greet them before the shields slam together, and only when they are close, really close, does the attacker charge. Then there is a great bellow of noise, a roar of anger and fear, and the shields meet like thunder and the big blades fall and the swords stab and the shrieks fill the sky as the two shield walls fight to the death. That is the way of battle.

After years of reading Cornwell’s Richard Sharpe novels of the Napoleonic Wars, which I devoured with great pleasure, I find the Warrior Chronicles to be at least as good.