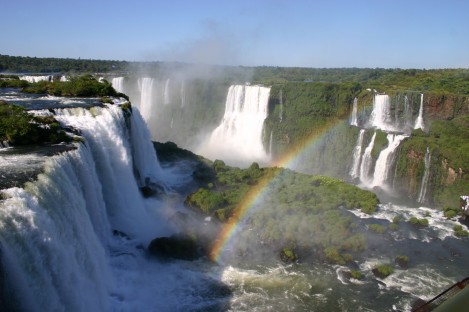 Rainbow Over the Falls

My doctor suggested I see it, my niece suggested I see it, my friends suggested I see it; so I decided to add Iguazu Falls to my itinerary. It is considered by some to be the most spectacular waterfalls on earth. It lies at a point where the borders of three countries meet: Argentina, Brazil, and Paraguay. About 20% of the falls are on Brazilian territory, and 80% on Argentinian territory. Nearby Paraguay gets 0%. To see the best long-distance view, I have to pay the $140 visa reciprocity fee to Brazil, even if I just sneak across the border for an hour or two. (I have already paid the Argentinian fee in 2011, which is good for ten years.)

I plan to spend two nights at Puerto Iguazu on the Argentinian side. To get there from Buenos Aires, I plan to take a Via Bariloche bus with their tutto letto service with 180º degree reclining bed/seats. The trip takes upwards of eighteen hours, though I get the chance to see a lot of countryside. On the way back, I will take a plane—carefully avoiding Aerolineas Argentinas to the maximum extent possible. (We had horrendous luck with them back in 2011.)

Whether I will spend $140 to see the Brazilian side of the falls for a few hours is still a moot point. My doctor said it’s worth it, but a lot of tourists have written that once you get close up to the Garganta del Diablo (the Devil’s Throat), everything else is secondary.

As I have written earlier, I have avoided the falls on earlier trips because of my hatred of mosquitoes. I will take a 100% DEET insect repellent with me and avoid spending too much time in the jungle areas around dusk. Instead, I will read a book in air conditioned comfort.