Americans are confused about the struggle between Russia and the Ukraine. Generally, we think of plucky little Ukraine holding Big Bad Putin at bay. Anyhow, that’s how Europe and the U.S. prefer to see it.

In reality, both Ukraine and Russia are the bad guys, or, as Jorge Luis Borges said about the Falklands conflict between Britain and Argentina, “it’s like two bald men fighting over a comb.” We know Vladimir Putin is a not nice guy who wants to undo Mikhail Gorbachev’s dissolution of the USSR back in1989-1990, which was not a popular move to the man in the street in Moscow or Petersburg. But then, the new government of Ukraine was essentially composed of industrial magnates and common thugs. (But then, so is Russia.)

Ukraine has already lost Crimea, which was a Russian-speaking area. (Not that Russian and Ukrainian are that far removed from one another, but, hey, we’re talking pretexts here!) Let’s compare the above map with a linguistic map of Ukraine ca. 2001: 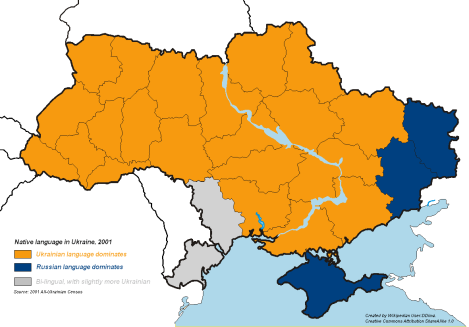 So Is It About Language?

It’s pretty clear that, aside from Crimea, the main Russian-speaking areas are in the Lugansk and Donetsk Oblasts (provinces) of Ukraine, only part of which the freedom-loving thugs of the Russian stripe have conquered after all this time. That’s not a very impressive performance, considering that Russian Spetsnas (спецназ) special forces are mingled with the rebel freedom fighters, and they have access to the latest Russian military technology.

Both sides have been fighting to what looks like a draw. If Putin wins, he’ll get the the two Russian-speaking oblasts to add to the Crimea. Although the eastern rebels have “On to Kiev!” slogans written on their tanks, neither Europe nor the U.S. want to see Ukraine snuffed out. And Germany’s Angela Merkel has hinted that she doesn’t want to see Mariupol in the Donetsk Oblast occupied. (Putin has shelled Mariupol, but has not tried to take it over.)

If Ukraine’s Poroshenko (or whichever magnate replaces him) wins, Russia will just take their winnings and go away. Of course, since Russia supplies Ukraine with natural gas for heating, they also hope not to be frozen out during a bad winter.

I don’t even know how I would want the conflict to end. Perhaps Putin and Poroshenko could fight it out in their underwear, with the loser getting a painful “Dutch rub.”