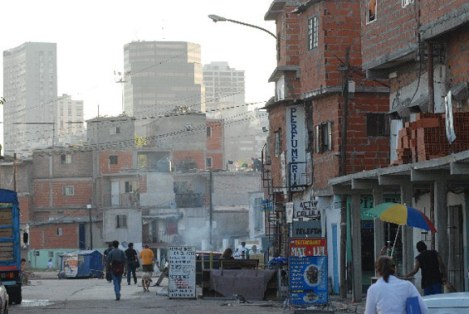 Yesterday, I did a little bit of research on travel in Ecuador on Lonely Planet’s Thorn Tree website. There I encountered the following complaint from a user called nemo_dat:

I’m a month into a two-month stint in Ecuador (enjoying a nice break between assignments). It’s my first time in South America and unfortunately I’ve been disappointed so far. I need to decide whether to stick it out in EC [Ecuador], go elsewhere in South or Central America, or perhaps cut the trip short and return home.

I’m having a hard time dealing with the air pollution, poverty, and sprawl. I’ve spent the past month in Quito and Cuenca. I left Quito because of the air pollution. I’m happier in Cuenca but was really looking forward to taking a scenic drive through the countryside today to see some unspoiled wilderness and breath fresh air. The scenery was nice in parts but my clothes reek of exhaust after spending the day driving. And while I saw some nice scenery I also saw some truly horrid buildings amidst the countryside.

I’ve been to several less-wealthy areas of the developed world, and while those places can be rough around the edges, I was easily able to find scenery and architecture to more than compensate. I just haven’t had the same “wow factor” in Ecuador.

I chose the Andes of Ecuador because I like mountain scenery and I’m not a fan of heat or humidity (not a beach person). But this isn’t working out. Are there places in Ecuador or elsewhere in C or S [Central or South] America I should consider?

I feel like an ass for saying it, but I think somewhere more “European” might be more in line with my preferences (I know that probably brings to mind Argentina).

Any advice on how to proceed is greatly appreciated.

Actually, I am rather sympathetic with nemo_dat: The fact of the matter is that some people are not cut out for travel in developing or undeveloped countries. Their curiosity is trumped by the discomfort factor, which can at times be considerable.

I had the misfortune to visit Yucatán in the early 1980s during a major heat wave and came down with some kind of tropical illness. I went to the front desk of the Hotel Cayre and asked them to send a recommended doctor, which they did—and promptly. He gave me an injection and wrote out a prescription, which I had filled out at a local farmacia. It did lead me to change my plans. I grabbed a flight to Tuxtla Gutiérrez in the State of Chiapas, high up in the Sierra Madres, and took a bus to San Cristóbal de las Casas, where it was reasonably cool at some 5,000 feet of altitude.

The complaint of nemo_dat is more about pollution and  a certain ratty quality prevalent in many if not most Latin American cities. Martine, for instance, complains bitterly about the broken sidewalks in Argentina and Mexico, which forced her to watch her step at all times. (In 1979, while watching for a break in the traffic at Insurgentes and the Reforma in Mexico City, I fell into a 10-foot ditch; so I can understand her.)

If that sort of thing is a problem, I suggest sticking to the mountains of the First World, like the U.S. or Canadian Rockies, the Swiss or Tyrolean Alps, or perhaps Australia. You’ll find a more “paradise-like” (translated: Disneyfied) environment there.

What you won’t run into there is the poor Aymara woman I met in Puno, Peru—now there’s a ratty city!—who was dragging around her home made knitwear. It was an icy morning at 12,500 feet altitude and I badly needed a scarf; so I bought one from her. She was so grateful that tears came to her eyes, and she stroked my arms as if I were a favorite family member.