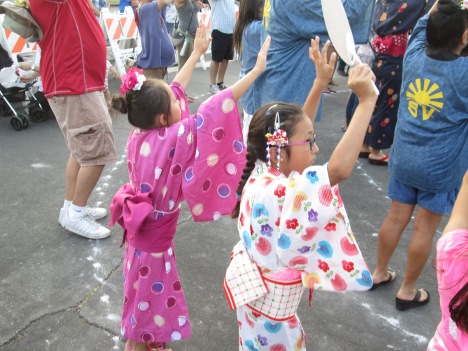 Two Little Girls in Kimonos Dancing to Honor Their Ancestors

This last weekend, as in most years, Martine and I attended the Obon Festival at the West Los Angeles Buddhist Temple. It is a joyous affair, especially when one considers all the dancing is to honor one’s ancestors who have passed on to the other side. According to Japan-Guide.Com:

Obon is an annual Buddhist event for commemorating one’s ancestors. It is believed that each year during obon, the ancestors’ spirits return to this world in order to visit their relatives.

Traditionally, lanterns are hung in front of houses to guide the ancestors’ spirits, obon dances (bon odori) are performed, graves are visited and food offerings are made at house altars and temples.

In West L.A., aside from services in the temple, which we didn’t attend, most of the festivities revolve around good eating and the traditional bon odori dances. Present were Japanese from over a dozen nearby Buddhist temples from as far away as Oakland and Visalia. Many Japanese go from one temple to the other during the multi-week Obon celebrations. As separated old friends from different areas greet one another, it adds to the gaiety of the dancing.

As I have written before, my favorite food item is the pork udon noodle soup on which I sprinkle some Shichimi Togarashi, a Japanese red chili powder with black sesame seeds and various herbs and spices. 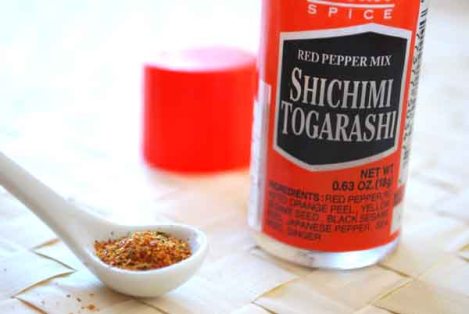 In all, I had two bowls of the stuff, which made me feel downright good about my ancestors and happy to be there at the Obon festival. I hope to continue going until such time as I join my own ancestors.