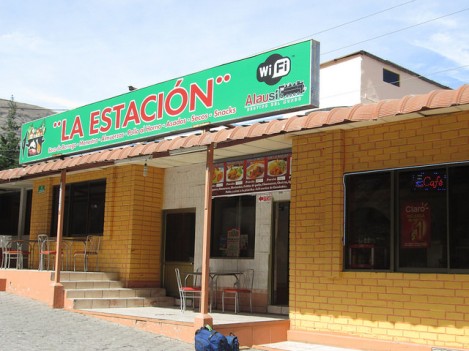 If you are unable to deal with uncertainty when traveling in other countries, it is possible that South America is not for you. One of my main destinations this trip was the Nariz Del Diablo railroad journey between Alausi and Sibambe. When I went to the bus terminal in Cuenca, I could not find a bus company that would sell me a ticket to Alausi; so I ponied up a few extra dollars for a ticket to Riobamba from the Patria bus company.

Alas, my Spanish is not good enough to understand what the ticket-sellers were trying to tell me. So I showed up the next morning and boarded my Patria bus, after telling the conductor I wanted to be let off on the Pan-American Highway near Alausi, which was a few kilometers away. I was met with another torrent of Spanish which I did not understand. (In this situation, it never helps to be flustered: I just played stupid and found my seat.)

Five hours later, the bus pulled up for a lunch stop at La Estación (shown above), from which Alausi was visible in the valley below. Not only could I get off there, but the conductor called a cab for me, for which I thanked him. I suspect what everyone was trying to tell me was that the bus did not actually go into the town, but I knew that to begin with. 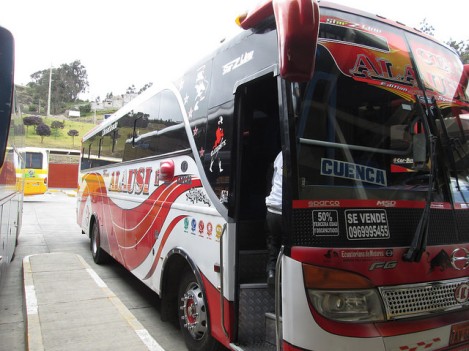 My Bus Back to Cuenca

Getting back was even more complicated. I took a cab from my hostería back to La Estación, where I waited two and a half hours for a bus back to Cuenca. I was going under the mistaken assumption that all buses stopped there. Apparently, they didn’t. (You can see my two blue bags in the first photo above.)

Just when I gave up hope, I walked to the edge of the highway prepared to flag down any bus. No sooner did I do that than—from a side street a couple hundred feet ahead of me—a second class bus from Alausi’s own line pulled onto the highway and stopped for me. I saw the Cuenca sign in the window and boarded.

We drove like a bat out of hell and covered the distance to Cuenca’s Terminal Terrestre in an hour less than the Patria bus took. The driver hit speed bumps and rumble strips at high speed, and my head bounced off the ceiling a couple of times. But I made it to Cuenca in good time and was happy.