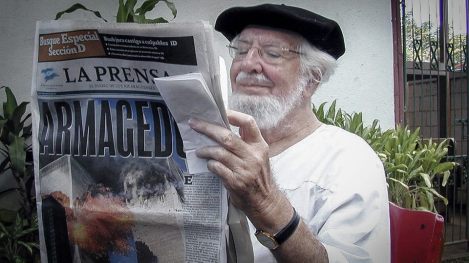 It suddenly struck me that i haven’t done a poetry posting on this blog for some time. Keeping it all in a Latin American vein, here is Roberto Bolaño’s “Ernesto Cardenal and I.” Ernesto Cardenal was the Sandinista minister of culture from 1979 to 1987 under Daniel Ortega’s government.

Ernesto Cardenal and I

I was out walking, sweaty and with hair plastered
to my face
when I saw Ernesto Cardenal approaching
from the opposite direction
and by way of greeting I said:
Father, in the Kingdom of Heaven
that is communism,
is there a place for homosexuals?
Yes, he said.
And for impenitent masturbators?
For sex slaves?
For sex fools?
For sadomasochists, for whores, for those obsessed
with enemas,
for those who can’t take it anymore, those who really truly
can’t take it anymore?
And Cardenal said yes.
And I raised my eyes
and the clouds looked like
the pale pink smiles of cats
and the trees cross-stitched on the hill
(the hill we’ve got to climb)
shook their branches.
Savage trees, as if saying
some day, sooner rather than later, you’ll have to come
into my rubbery arms, into my scraggly arms,
into my cold arms. A botanical frigidity
that’ll stand your hair on end.