Home » politics » More Than You Ever Wanted to Know 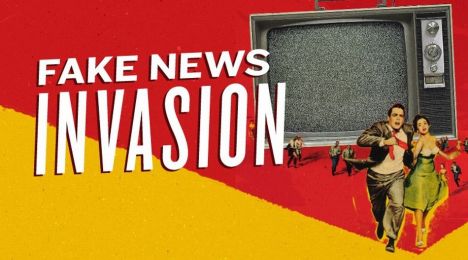 But Don’t Let That Lull You into Passivity!

That little photo inset in the above picture are of Kevin McCarthy and Dana Wynter from Invasion of the Body Snatchers (1956). You remember that picture: It’s where pods from Outer Space are replacing the citizens of a sleepy Northern California town. How appropriate! It seems that the invasion is coming from the Evil Forces of Trumpfism and his Alt-Right followers.

The news cycle has become overcrowded with Tweets, Executive Orders, and the usual run of Republican Follies (such as the new unlamented American Health Care Act (AHCA). Where the presidency used to generate only two or three news stories each day, now we are confronted with a whole slew of attempts to deprive the citizens of this country of what they want and what they need. Our formerly good government is being replaced by an invasion of Right Wing Pod People with their alternative facts (lies), economic nationalism (isolationism), enemy of the people (friend of the people), fake news (truth), and America first (corporations and billionaires first).

There’s Always Plenty to Go Around!

There is an old Chinese curse: “May you live in interesting times!” It’s so easy to become dispirited and just give up. Even if you feel as if you’re being attacked by a hydra, I suggest you stay awake and defend your liberties. Get used to letting your two state senators and your congressman know what you want. Call or e-mail them on a regular basis. Let them know they can be replaced in 2018—and you know that’s just around the corner.

4 thoughts on “More Than You Ever Wanted to Know”