Mark April 25 on Your Calendar!

I love penguins. So much so that I traveled over 6,000 miles to see them in Argentina. Oh, not the big Emperor Penguins of Antarctica—though they were only about 600 miles farther south. No, Martine and I visited with the Magellanic Penguins (Spheniscus magellanicus) in two places the Isla Martillo in Tierra del Fuego, and Punta Tombo in the State of Chubut.

Why do I like penguins so much? They lead such strange lives. Months at a time in the icy waters of the South Atlantic, then return to the same old rookery to find a mate and try to raise a family of little penguins. As it happens, we were at Punta Tombo in November 2011, right when their eggs were hatching. We saw the penguins look on helplessly while ravenous gulls pushed them aside and devoured their progeny. Their wings were great for swimming, but helpless to defend their eggs against more aggressive shore birds. 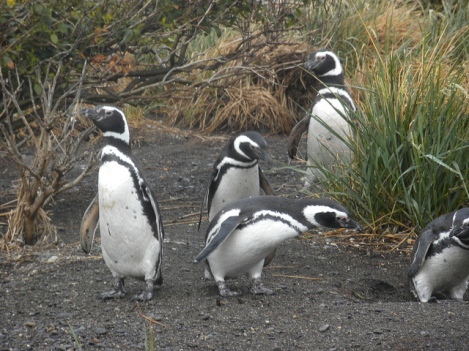 In the above picture by Berkeley Breathed for World Penguin Day, the middle penguin is my hero, Opus. You can see his adventures by going to Breathed’s Facebook page at Bloom County.

Here are some facts about my friends, the Magellanic Penguins:

4 thoughts on “You Can Start Celebrating Now!”