Home » poems » The Tomb of the Hero 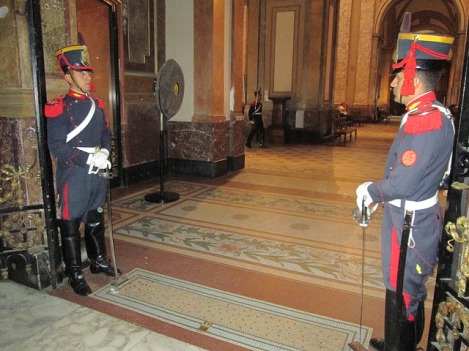 The liberators of South America from the Spanish are honored throughout South America. One keeps running into the names of Bolivar, San Martin, Sucré, and O’Higgins again and again. The honor guard at the Metropolitan Cathedral on the north side of the Plazo de Mayo in Buenos Aires is dressed in the uniforms of the early 19th century, with swords drawn and standing at rigid attention.

Even Jorge Luis Borges, who never served in any country’s military, bragged of being descended from Colonel Manuel Isidoro Suárez, hero of the Battle of Junín in far-off Peru back in 1824. Many of his poems refer to this ancestral hero. Here is the last stanza of “A Page to Commemorate Manuel Suárez, Victor at Junín”:

His great-grandson is writing these lines
and a silent voice comes to him out of the past,
out of the blood:
“What does my battle at Junín matter if it is only
a glorious memory, or a date learned by rote
for an examination, or a place in the atlas?
The battle is everlasting and can do without
the pomp of actual armies and of trumpets.
Junín is two civilians cursing a tyrant
on a street corner,
or an unknown man somewhere, dying in prison.

I have read biographies of Bolivar and San Martín—as well as Gabriel García Márquez’s excellent The General in His Labyrinth, about the former—only to find that the heroes are more honored today than they were in their lifetimes. San Martín became so disgusted with his fellow Argentines that he moved to France. Only many years later did the Argentines invest him with the sanctity he wears today like an uneasy crown.