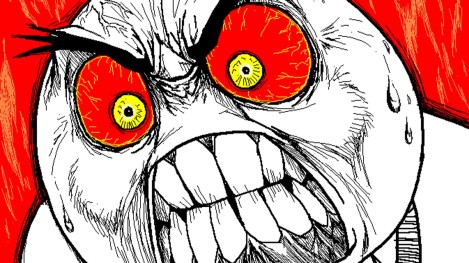 There I was, sitting at Lee’s Kitchen in Torrance by my lonesome eating a plate of spicy Szechuan eggplant when it all suddenly fell into place for me. I have been struggling since election night in November 2016 to determine what suddenly happened to my country. It took a German philosopher named Peter Sloterdijk to point at a few things I have been missing. The article was in the February 26, 2018 issue of The New Yorker, entitled “A Celebrity Philosopher Explains the Populist Insurgency”:

Sloterdijk deplored the rise of the right, but he couldn’t resist seeing something salutary in the spectacle. “It’s been coming for a long time,” he said. “It’s also a sign that Germans are more like the rest of humanity than they like to believe.” He started talking about “rage banks,” his term for the way that disparate grievances can be organized into larger reserves of political capital.

He described this concept in his 2006 book Rage and Time, an examination of the loathing of liberal democracy by nativist, populist, anarchic, and terrorist movements. The book follows his usual detour-giddy historical method, comparing political uses of anger, and of related emotions such as pride and resentment, from Homer to the present. In premodern societies, he argues, vengeance and blood feuds provided ample outlet for these impulses. Later, loyalty to the nation-state performed a similar function, and international Communism managed to direct class rage into utopian projects. But modern capitalism presents a particular problem. “Ever more irritated and isolated individuals find themselves surrounded by impossible offers,” he writes, and, out of this frustrated desire, “an impulse to hate everything emerges.” It was this kind of rage, Sloterdijk believes, that was on display in the riots in the banlieues of Paris in 2005.

In Rage and Time, Sloterdijk writes that the discontents of capitalism leave societies susceptible to “rage entrepreneurs”—a phrase that uncannily foreshadows the advent of Donald Trump. When we spoke about Trump, Sloterdijk explained him as part of a shift in Western history. “This is a moment that won’t come again,” he told me. “Both of the old Anglophone empires have within a short period withdrawn from the universal perspective.” Sloterdijk went so far as to claim that Trump uses fears of ecological devastation in his favor. “The moment for me was when I first heard him say ‘America First,’ ” he said. “That means: America to the front of the line! But it’s not the line for globalization anymore, but the line for resources. Trump channels this global feeling of ecological doom.”

There is no doubt in my mind that this rage has been building for years and reached a peak during the two Obama terms. It became so intense to certain segments of society that have felt increasingly left out of the political process—by an uppity nigra no less—that they exercised their “impulse to hate everything.” The rickety Electoral College did the rest.

Since Trump has taken office, a new rage has been building, mostly in the states that voted for Clinton. It can be expressed in the T-Shirt from Redbubble that reads, “FUCK TRUMP AND FUCK YOU FOR VOTING FOR HIM.”

Tomorrow, when I take the train to go downtown to the Central Library, I plan to take out Sloterdijk’s book Rage and Time, if I can find it.