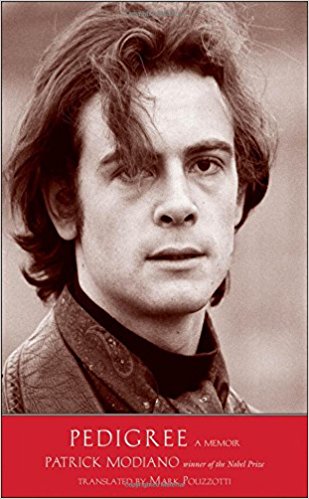 Patrick Modiano in 1968, the Year His First Novel Was Published

I have just finished reading the book whose cover is shown above. It is an autobiographical essay by a Nobel-Prize-winning (2014) author that covers the years from his earliest childhood to the publication of his first book in 1968. I believe I have mentioned elsewhere that Patrick Modiano is by far my favorite living French author. He is approximately the same age as I am, and I feel a unique kinship with him and his work. So far I have read six books by him, and I am just getting started.

His autobiographical essay Pedigree: A Memoir is painful to read. The author was raised—or I should rather say neglected by—two parents who did not particularly care to see him and shunted him off to various boarding schools, the farther apart from Paris the better. Below is a savage description of his mother, who was a small-time actress:

She was a pretty girl with an arid heart. Her fiancé [after her divorce from Patrick’s father] had given her a chow-chow, but she didn’t take care of it and left it with various people, as she would later do with me. The chow-chow killed itself by leaping from a window. The dog appears in two or three photos, and I have to admit he touches me deeply and that I feel a great kinship with him.