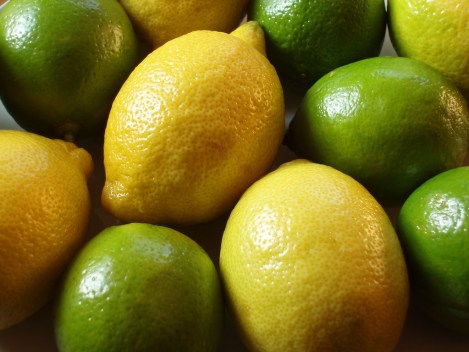 A Bowl of Lemons and Limes

This is a story that begins almost sixty years ago. As a student at Chanel High School, I occasionally took college-level courses in English at Western Reserve University during the summers. I would take two buses to East 105th Street and Euclid Avenue. At the southwest corner, there used to be a drug store that has a soda fountain. I became addicted to a menu item that they called a “fresh lime rickey,” except that this version contained sugar and had no gin, bourbon, or other liquors. It was delicious.

Some ten years plus pass. I assert my independence from my parents by taking trips to Mexico. I note that, unlike on our side of the Rio Grande, there are virtually no lemons available—but lots of limes. When one asks for limones in Mexico, one gets limes.

Another twenty years pass. During cool weather in Los Angeles, I always take my hot tea with a squeeze of lime.

I could not help noticing that Mexican fruit vendors have a little plastic device they use to squeeze out all the juice from halved limes onto the fruit salads they sell. My mind, which had been working extraordinarily sluggishly suddenly flashed a bright “Aha!” I found one of these squeezie devices at the supermarket. Limes, which run for half a dollar each at Gringo supermarkets can be obtained for a dollar a bag from a little old Chinese woman who sells them on the streets of Chinatown. And there is a Mexican market just a couple blocks from me, the Eden Mercado, that sells them for a reasonable price.

The result: I have rediscovered lime rickeys, though made slightly differently because of my diabetes. I press out the juice from a lime half into a glass, add water, ice, and artificial sweetener, and I have a delicious drink that is much better by far than lemonade.