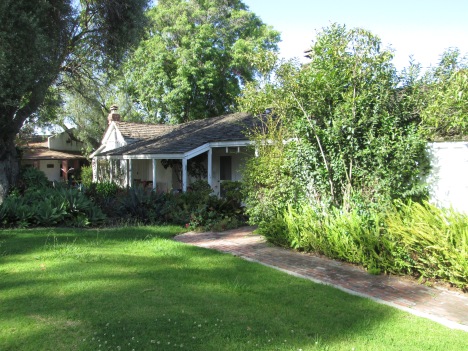 Just north of the Los Angeles Airport, adjacent to the southbound lanes of the San Diego Freeway (the I-405), is one of the 43 surviving adobes around Los Angeles. Sitting somewhat incongruously on a suburban street full of ticky-tack postwar single-family homes, the adobe is run by the Historical Society of Centinela Valley. The Centinela Adobe is the original structure of a huge Mexican land grant comprising some 25,000 acres of the Rancho Aguaje de la Centinela, including parts of the communities of Inglewood and Westchester.

Built in 1834, the adobe is generally open only on Sunday afternoons. Martine and I were there at opening time and had a great tour of the premises by one of the volunteers who was both knowledgeable and forthcoming on the many historical exhibits.

Looking at the above photograph, it looks as if the structure is a wood frame house. A kitchen extension built later is indeed built with wood, but the main part of the structure is built with mud bricks (such as the ones shown in the picture below), covered with stucco, and painted over with white paint. Originally, the roof consisted of tar taken from the La Brea Tar Pits. It lasted about a hundred years, until the 1930 Long Beach earthquake forced the Historical Society to install a modern roof.

Adobe Mud Bricks of Which the Main Building Is Constructed

In September, there will be a big Mexican-style fiesta at the adobe which I plan to attend. Next weekend, there will be a barbecue, but as a diabetic, I tend to eschew the usually heavily sugared barbecue sauces.

People tend to think that California is a state without a history. In fact, Los Angeles goes back to the year 1781 and has flown the flags of Spain, Mexico, and the United States. Parts of the state were also under Russian control in the 1850s—but very briefly. I plan on visiting more of the adobes and ranchos that were the base that the second largest city in the United States was built.