Today, Martine and I visited the Autry National Center, which was putting on a show of the late American Indian painter and sculptor, Rick Bartow, entitled “Things You Know But Cannot Explain.” I was enthralled by Bartow’s vision of people and the wild animals whose spirits have invaded them. A member of the Mad River Band of Wiyot Indians, Bartow  lived much of his life around Newport, Oregon.

The deer spirit illustrated above is typical of Bartow’s depiction of human verging on totemic animal. Another is the drawing that gave its name to the show: 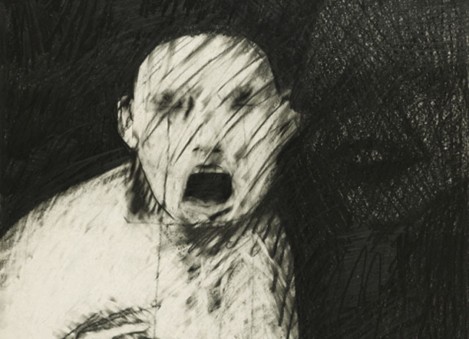 “Things You Know But Cannot Explain”

Note the face seeming to emerge from the upper right behind the foreground figure, who appears to be paralyzed with fright. Much more traditional is the drawing of three hawks below. 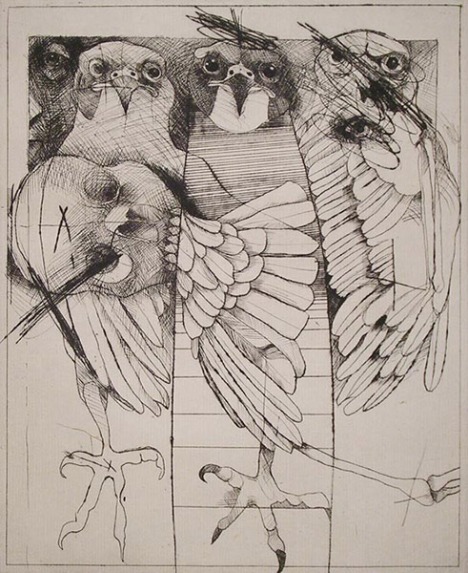 I may not have a drop of Native American blood in me, but I am always delighted to see creative depictions of animals I consider to be my own personal totems, among whom I include the coyote, the raven, and the bear. Because I live at the edge of the desert and Bartow lived in the wet forests of the north, he did not depict my other totems, the frog and the turtle, both of whom I associate with life-giving rain.

Some of Bartow’s most impressive works are his sculptures. Perhaps I will do another posting on those later on. They are usually formed of wood, nails, and various found objects.

At a time when much of the art work is ruled by abstract expressionist garbage, I find Rick Bartow to be rooted in an ancient tradition that manages to speak to me today.