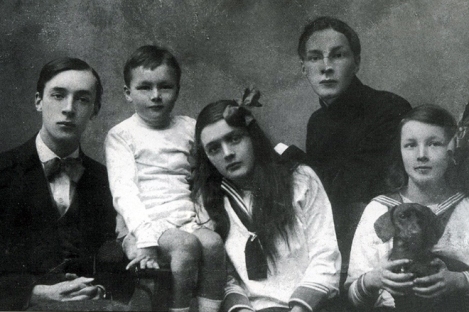 I am in the process of reading one of the greatest biographies ever written: Vladimir Nabokov’s Speak Memory: An Autobiography Revisited (1967). It ranks in my estimation with James Boswell’s Life of Samuel Johnson and the Journals of Sir Walter Scott. For many years in his childhood, he had had a French-speaking Swiss nurse called, in his autobiography, simply Mademoiselle. Here, years after she had retired, he describes seeing her in her old age:

Before leaving for Basle and Berlin, I happened to be walking along the lake in the cold, misty night. At one spot a lone light dimly diluted the darkness and transformed the mist into a visible drizzle. “Il pleut toujours en Suisse” [“It always rains in Switzerland”] was one of those casual comments which, formerly, had made Mademoiselle weep. Below, a wide ripple, almost a wave, and something vaguely white attracted my eye. As I came quite close to the lapping water, I saw what it was—an aged swan, a large, uncouth, dodo-like creature, making ridiculous efforts to hoist himself into a moored boat. He could not do it. The heavy, impotent flapping of his wings, their slippery sound against the rocking and plashing boat, the gluey glistening of the dark swell where it caught the light—all seemed for a moment laden with that strange significance which sometimes in dreams is attached to a finger pressed to mute lips and then pointed at something the dreamer has no time to distinguish before waking with a start. But although I soon forgot that dismal light, it was, oddly enough, that night, that compound image—shudder and swan and swell—which first came to my mind when a couple of years later I learned that Mademoiselle had died.

She had spent all her life in feeling miserable: this misery was her native element: its fluctuations, its varying depths, alone gave her the impression of moving and living. What bothers me is that a sense of misery, and nothing else, is not enough to make a permanent soul. My enormous and morose Mademoiselle is all right on earth but impossible in eternity. Have I really salvaged her from fiction? Just before the rhythm I hear falters and fades, I catch myself wondering whether, during the years I knew her, I had not kept utterly missing something in her that was far more she than her chins or her ways or even her French—something perhaps akin to that last glimpse of her, to the radiant deceit she had used in order to have me depart pleased with my own kindness,* or to that swan whose agony was so much closer to artistic truth than a drooping dancer’s pale arms; something, in short, that I could appreciate only after the things and beings that I had most loved in the security of my childhood had been turned to ashes or shot through the heart.

* Nabokov had bought her deaf old nurse a hearing aid which she said made it possible to hear her former charge’s voice perfectly, except that Nabokov had not said anything.

One thought on “Serendipity: Nabokov’s Mademoiselle”